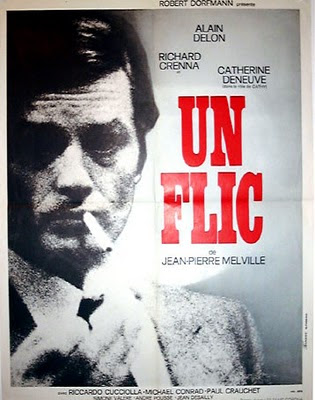 Astrid:
Un Flic is slow, stylish, vacuous, dangerous and a little bit dull. It makes me want to compare it to all the fantastic French movies I have seen and conclude that it is just not that great in the context.

Maybe this is genius and I'm the idiot here, but I am bored by straightforward bank robbery flicks.
There are no surprising twists here and Catherine Deneuve is hardly in the film. It's just oldish men in trench coats driving around in rain.

Alain Delon is cool and the best thing about the film. He has a phone in his cop car. The phone may actually be the star of the film. How did they do portable phones in the 1960s? The phone receiver is like a regular land line phone. And they are sexy.

Every time I'm in a hotel room with a land line phone I have to make long calls to the room next door (or where ever there is someone I know) and stare at myself in the mirror.

Melville is inspiring even when he is boring. There is scope for imagination here.

Nick:
Melville and Alain Delon, the director/actor team from one my favorite ever pictures,  Le Samourai. Un Flic (A Cop) doesn't disappoint, this is the final film by Melville and it's quite majestic.

You can contemplate that directors like Jarmusch dream of the opening shot of a car driving along the kerb of a rain and windswept ocean front. The two robberies in the film, one in a bank and one on a train, both long scenes without dialogue, must have impressed Tarantino with their lack of showiness, oh to teach him restraint. The look of this film must have been studied by Scorsese, it's so precise. Yes, Melville is a master of the gangster movie genre, mixing villains with existentialism.

Alain Delon plays the cop of the title cleaning the streets of Paris of crime. He's a rather clumsy cop, not perfect and almost bored by the job. Catherine Deneuve plays the femme fatal that Delon has an  affair with. Richard Crenna plays her partner who heads the crime team making the robberies. There is little plot, as mentioned the dialogue is sparse, but Melville still turns up the tension and weaves heavy atmosphere with a series of magnificent shots and scenes. Deneuve has never looked so good on film. Delon matches her with an extra dose of weariness, though he's not quite the dish from Le Samourai.

Delon is cop at the piano in the bar, playing Michel Colombier's wonderful music. Deneuve dressed as a nurse administering murder through a needle. The transvestite informant has a special relationship with the cop. The suicide with a pistol to the head we think we see. The final long shot of the cop and his sidekick in a car, glum and destroyed by the routine of being policemen and how the case has turned out,  is funny yet sad. There is so much to enjoy in this picture. An absorbing masterpiece, track down Un Flic, it's worth it.
Email Post