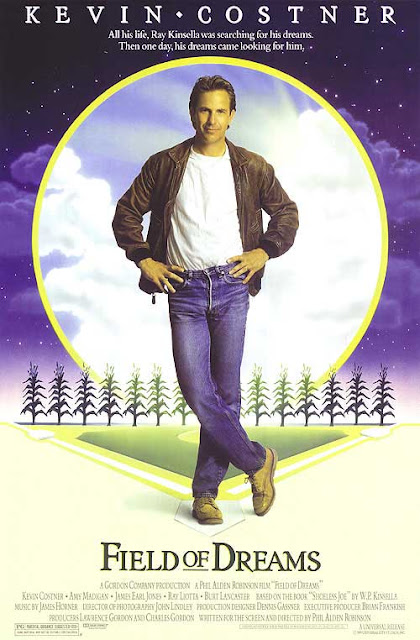 Nick:
I have a tendency to cry my eyes out at overly sentimental films. I even cried once during the 70's remake of King Kong. And don't mention The Bridges Of Madison County. Field Of Dreams is a  classic weepie, it leaves a sickly sentimental taste and is all the better for it.

It also stars Kevin Costner. What can one say. That he is a movie star called Kevin should get your suspicions up. He's the all-American boy who made terrible movie choices after a bright start. Field Of Dreams was part of that early promise. Man hears voices on farm, destroys his crop, builds his own baseball field. Ghosts of great baseball players start showing up on the field. Bankruptcy looms, what can all this mean? And why did the voice tell Ray (Costner) "Build it and he will come". Who will come? These mysteries are all solved.

What makes Field Of Dreams interesting is it's mainstream sheen. This is all-American Pie. It's good old democracy and decency and a reminder of a time when American was good.  Field Of Dreams has more than a nod to the good feeling of the films of Frank Capra (although it never approaches the darkness Capra was capable of).


Fine performances from James Earl Jones, Burt Lancaster & Ray Liotta back Costner up. They lay it on thick at the end as it get's overly sentimental. This is as good as Hollywood gets with this stuff. But Field Of Dreams  still has an original plot line, it creates a weird tension for such popular fare.  And it sends out a positive yet simple message:  hold onto your dreams, you never know when they may come and find you.

Astrid:
Just that day prior to watching Field of Dreams I had voiced major realizations in my life, for example that I have been afraid to dream. Or at least, if I have dreamed, those dreams have not been revealed to anyone. If someone asks to know my dreams, I give them my goals. Honestly, I have only now (this week) realized the difference.

Dreaming has been dangerous in my life, because of the lack of trust I harbor towards people and nature. But to dream of only things you know you can have or achieve is not dreaming.

This all said, I was amazed to be watching a movie about the miraculous effects of daring to dream.
The subject matter here is endlessly fascinating, but I am baffled by the lack of aesthetics. In a cinematic sense, there is nothing there. The imagination required for dreaming was not illuminating the photographer, set designers, costume designers, casting or even the director. Meat and potatoes.
Did they make this film for children or for some farming community? (I don't want to disrespect either parties, but a strong sense of undermining the target audience is present here – Hollywood at its least artistic)

Then there is baseball. Nick had to repeatedly remind me that this film is not about baseball. But I am just immediately bored when I realize that someone's dream involves a baseball bat. No, I am not American and I am not a man and I do not get sentimental about catching a ball. I begin to fall asleep.
I feel sad that a movie about dreaming is getting such a cynic's response from me. There's something wrong with me, I guess.

Still, I must mention Kevin Costner, because secretly I think he was sleepwalking through the film with me – the voice from the fields made him robotic. Don't get me wrong: I have secret dreams and I love movies about dreaming – just not this one.
Email Post