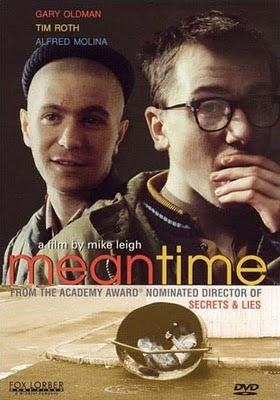 Nick:
Meantime was a reminder to me of a time in my life: the futility of being young, when there really was "no future", prospects were zero and the only way to get a life was to get out. Welcome to Thatcher's Britain, 1984. I came from this side of the skids and was 18 when this film was made. I knew people like the characters out of Meantime. If I hadn't of been so lucky, I could of been living a life like Mark, played by an excellent Phil Daniels.

What a cast Mike Leigh assembled for Meantime. Daniels, Tim Roth (Graham Coxon from Blur has obviously based his whole persona on Roth's Colin), Gary Oldman, Alfred Molina and Pam Ferris. It's a very run down council estate in London, unemployed Colin and Mark live with there parents, nothing to do all day other than hang in the streets. When Colin gets offered a temporary job by his aunt, Mark's jealousy sways his brother from taking the job.

These are real lives. It's post punk Britain on the doll.  This is the Specials' Ghost Town in celluloid form. Alan Bleasdale's brilliant TV series Boys From The Blackstuff  dealt with the effects of unemployment of Thatcher's Britain better, but Meantime addresses the dis-effected youth with greater intensity. Who makes films like Meantime anymore? These problems still exist. In our pampered, privileged lives, can we even contemplate that people in our own neighborhoods still live in these conditions? They do you know and we are all one step away from this.

Mike Leigh's brilliant film paints a world outside our windows of inner-city decay and despondency. Amongst all this,  Leigh's characters still laugh, still have friendships and their pride. It's all about economics, to echo a character from Meantime. Yes it is, and these are the effects.

Astrid:
I appreciate Mike Leigh's ability to compose emotion within his portrayals of the English lower classes. He does not sentimentalize, he isn't angry, but empathy towards his characters is always there.
The empathy is what makes films such as Meantime watchable. Without it, this would be too depressing and draining an experience.

Meantime makes me cough more. The rooms are so moldy, drafty and cold, and the family is so disappointed amongst it all. Mother, father and two adult sons smoke in all rooms. All three men are unemployed. There appear to be no dreams, aspirations, direction or even a faint promise of something better for these people.

The photography from London in the early 1980s reveals an equally grim and poor exterior. Big Ben is surrounded by scaffolding and the suburbs look like they were bombed.

This is a world where mental disabilities or even shyness get no sympathy, they just make you more vulnerable. It is a city jungle where baked beans are dinner and cigarettes are pleasure, beds creak and windows will fall off if opened. Life is about basic survival. Mike Leigh knows that poverty is not sexy and glamorous. It is desperate and it can ruin people.
Email Post