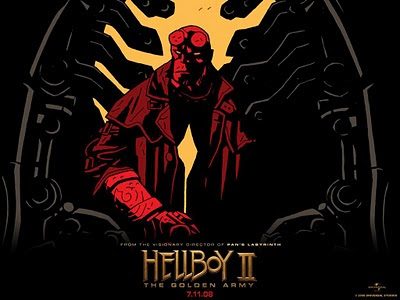 Nick:
In the last year or so I've got back into reading comics. From the age of seven I started reading the famously banned Action comic which was the precursor to seminal Si-Fi comic 2000AD. By the age of fifteen I was collecting up to 7 titles a week, from English to USA Marvel. When I left the UK to live in Finland I stopped reading any comic titles. But, it's fair to say, I'm a bit of a comic nut.

Mike Mignola's Hellboy I've only read a little.  Guillermo del Toro really is the right director for this franchise,  certainly from the visual aspect, he's probably the best adapter of comic book worlds I've ever watched. But he really shouldn't write the screenplays to these films. The script to Hellboy II can be described as obvious, patronizing and so on. del Toro constantly alludes to the fact that the audience won't believe that comic book characters could discuss adult themes, so simplistic cliches are proffered from Hellboy and his chums on the topics of romance, fatherhood and domesticity.

The dry humor from the first Hellboy picture is still here, as often displayed by Ron Perlman as Hellboy himself, but this time round it's a little overcooked. The actions scenes are impressive initially but often outstay there welcome. del Toro makes the claim that little CGI is used in his movies, but this seems to be a CGI festival at times, it really is like watching PlayStation. It get's a little messy, and the action is not so clear at times.

Despite all these faults, there is a lot of good stuff going on. Yes, as mentioned, some of this film looks amazing, the underworld lairs that del Toro creates are stunning. He can bring fairytale worlds to life and does so here. All the performances are top notch and the characters are a little more relaxed this time round. The Johan Krauss figure is a great addition to the team of Hellboy, Liz & Abe. It also prominently features a Barry Manilow song.

As comic book to movie adaptations go, the Hellboy films are among the best. There is no real tension here or over-bearing angst like the recent Batman films. Maybe that's a good thing. Overall this is very entertaining, it's trash on a  Sunday afternoon, and sometimes that's enough.

Astrid:
I have to admit I had been oddly entertained by Hellboy and therefore was curious about Hellboy II.
But oh, did it disappoint. They had (accidentally?) injected Lord of The Rings into a comic adaptation that supposedly takes place in New York of the 2000s. I cannot take anything lordoftherings -like anymore. I wasted nine hours on the trilogy during the last decade. Mixing the comic book Manhattan with Tolkien just won't do.

I cannot go into details about plot or anything much soon as this was simply repetition of what we saw in Hellboy already and then there was the adventure in the land of goblins... The film presents emotions with the kind of depth worryingly shallow even for an 11-year-old. But that is the point – I must be too old.

The very end of the film offers a treasure: Liz is expecting twins instead of just one baby.
What do we learn? Well, that it all leads to procreation. Still.
Email Post