Bringing Out The Dead (1999) Directed by Martin Scorsese 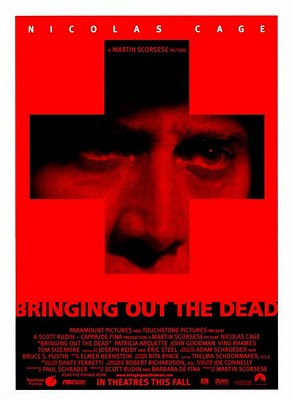 Nick:
Marty Scorsese back on the mother fucking streets! Paul Schrader by his side! The Clash, Martha &The Vandellas, REM, Van Morrison on the soundtrack! Marty Scorsese/New York City! This time saving the scum on the streets! Wow! Ouch! Wow! Is this movie heaven?  But Wait! (crescendo)...there is something missing.

This should be the natural follow up to Taxi Driver, hell it even has some of the same slow motion shots with steamy hydrants, the laconic detached voice-over, Scorsese referencing Scorsese. Bringing Out The Dead is based on Joe Connelly's non-fiction account of a paramedic working the graveyard shift in Hell's Kitchen in the early 1990s. Nicolas Cage plays the paramedic  Frank Pierce who can't sleep, drinks too much and is losing his mind by the demands of his job, while he is haunted by the dead people he has been unable to save whilst on the job.

The good news is the Cage that turns up on Bringing Out the Dead is the good one. You know, the one from Wild At Heart, Leaving Las Vegas, Birdy, Peggy Sue Got Married, Raising Arizona and Face/Off. You often feel that Cage has made a lot of dross because when he does find a good script, he puts his all into it, so maybe he just saves the effort for the good ones and picks up the paycheck for the crap ones. Yes, he's good in this and the reason Bringing Out The Dead works is his commitment to the film. We believe Cage as Frank. He looks terrible, the thousand yard stare down pat, this is by no means an A-list star slumming it. Cage goes out there in an honest performance.

My main problem with Bringing Out The Dead is Scorsese himself. I'm not sure he quite believes in this film. He's covering old ground and is struggling to bring a new twist to it. He doesn't trust Schrader's excellent script. He should, there are many great lines here. The camera work is restless, Scorsese feels he can create the chaos of Hell's Kitchen just by fast-cuts and some loud rock n roll. Yes, again, the technical aspects of Bringing Out The Dead are superb. The energy at times is effortless. There is humor and it's the darkest black. Don't get me wrong, this may be the last great Scorsese picture. I think in 20 years people will reclaim this film. Nothing bar his Bob Dylan documentary comes close to this in recent times. So, what am I missing?  Maybe the passage of time to put Bringing Out The Dead in it's proper context. I think I will enjoy this film more in a few years time.

Finally, this is a grim New York Scorsese shows us. Hope is really not in the air. People are tired and worn down by the city. It's this heavy heart Scorsese brings to the picture that maybe brings it down. It hurts him to show New York this way. There is no light here, just darkness and a weary sigh.

Astrid:
Nicholas Cage is Sailor in Wild At Heart and that's how I like to think of him. He's good at over-dramatic melancholy and directionless unpredictability. If I forget about Sailor, then Cage threatens to be code for boring. I have seen one of his ex-homes in LA, a princess castle of sorts.
Strange choice if you could have anything in the world.

In Bringing Out The Dead Cage is good in that melancholy-to-the-maximum way. It is a thankful role for him to be the messed-up ambulance man with noble intentions.

But this is a Scorsese film. My expectations are always high with him. The aesthetic is there. The editing and the way Manhattan is portrayed is stylish, hectic and theatrical. Yet, somehow I cannot help but feel that I am watching an extended episode of ER. The material lacks a layer of contemplation. We are dealing with death and the unfair jungle laws of a big city, but the film does not offer much space for reflection.

In the little making-of featurette Scorsese offers his motivation for doing this film: he grew up in this city of contradiction. The nice families were in their homes among the underprivileged who were always dying in the streets. Scorsese mentions empathy and the difficulty of knowing what to do with the feeling when these people are at the same time disgusting. The abject. I understand what drew Scorsese to the script, but wish he had been able to put more of this contradiction in his movie.

Bringing Out The Dead is a well made movie from the 1990s. But it suffers from the general apathy, lethargy and lazy approach to any statements, opinions or feelings. I'm starting to think that this was a disease of the era; end-of-the-century freeze. Even ghosts are a little ineffective in inducing fear or any kind of wonder here.
Email Post