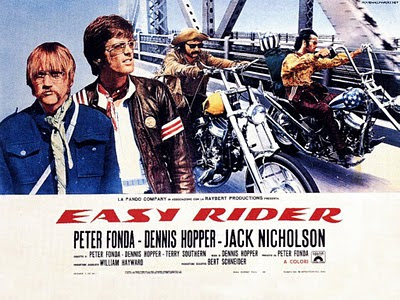 Astrid:
I was under the impression that I had not watched Easy Rider ever before. I wanted to see it now, because it has a somewhat important place in the story of how the New Hollywood era came about, and it represents one side of the rebellion within the industry.

Quickly I realized that I had in fact seen the film before, and that I had found it extremely boring then.
This is yet another buddies-on-the-road flick (see our recent reviews of Thelma & Louise and Rain Man). This time the men are rather macho, although the mainstream America of the time finds them threateningly feminine in their long hair and hippie manners. Instead of a car these dudes ride motor bikes. The photography of landscapes is enjoyable and was done by Laszlo Kovacs, but the editing is annoying and pretentious.

The editing and it's annoyingly patronizing manner is a continuation from other huge faults in this movie: the script is a big void, but not in the stylish European 1960s way, which it is of course trying to channel. I'm sorry but I think that Hopper and Fonda just were too high and too simplistic to begin with. Meat and potatoes. There is an earnestness about the drug taking, dealing, the little games on the bikes, the whore house and the rest. Where is the tension? By the year 2010 this all doesn't come across as frank portrayal of where American youth culture was at in relation to the rest of the land, it isn't radical, it's not even sexy.

The patronizing tone of this historically interesting piece is aimed to two directions. Its message to the Hollywood studio system is that it is out of step with its young audience. Its tune to the audience is equally as educational: a hardly cooked notion of freedom tied to drugs and travel. There might be a very confusing mishmash of maleness on offer here, which could be something for further investigation. It crossed my mind that Fonda's character could be interpreted as gay (no interest in women on offer, mourns the death of a short-time male friend on the road, the look, the reason to get away in the first place).

The highlight of Easy Rider is Jack Nicholson and his portrayal of an alcoholic small-town lawyer. The receding hairline and the lumps of hair turning to all directions have become an important asset in his acting. Here in his break-through role the hair already plays a part. Nicholson is the only one with a meaty role, and the only one who can give it some in this generally boring movie.

Nick :
Ripe for the slaying, sacred cows come no bigger than this picture. Influential in many respects, this movie showed the New Hollywood of the late 60's that there could be money made from the Youth Market and also that independent productions from the studio systems could earn success. It wasn't such a long road to Star Wars.

Two biker hippies make a drug deal with the man (a yellow sunglasses Phil Spector) and then bike from LA to New Orleans to find themselves. Hopper as well as directing plays one of the bikers Billy, a constantly annoying stoned wreck who says "man" a lot. The other lead is played by Peter Fonda, whose Wyatt is a cool leather-clad silent type. On their bike ride they come across hippie communes, dope smoking,  racists, more hippies and dope smoking.

It spouts a symbolic/condescending message about old attitudes and the new counter culture. If you watch Easy Rider you may come under the belief that white middle class hippies had a much harder time in the deep south than say, being a black person. The drug taking scenes in this movie tend to be of the "look at me I'm smoking a spliff on screen" variety, with drug taking cliches espoused by the central characters. The less said about the pretentious acid taking scene in New Orleans the better.

Easy Rider does have a few good things going for it. A great soundtrack  featuring the Byrds, Hendrix and The Band amongst others. Jack Nicholson's all to brief straight Southern lawyer cameo energizes the film. The great Laszlo Kovacs photography is a joy to behold, the best scenes just being endless shots of America from the road.

At times embarrassing in it's efforts to be cool, this is generally just a boring film. Easy Rider is a poor picture on 60's counter culture in comparison to landmark films such as Performance, Blow-Up or producer Rafelson's own Five Easy Pieces. Those pictures had a clearer perspective on the changes that happened in Youth Culture in the 60's. The simplistic depiction of Red Necks coupled with the self importance and  white middle class indulgunce of the Hippies, Easy Rider's a great argument for the whole Punk Rock movement that would follow. The saying "Never Trust A Hippie" might just have been coined for this over rated piece of pop culture.
Email Post