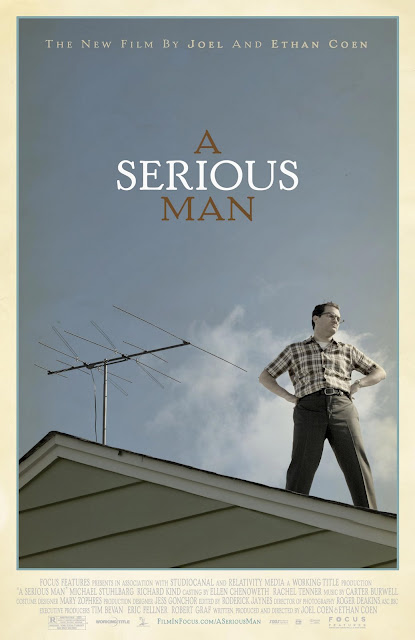 Astrid:
A Serious Man was a very entertaining film for me to watch. I like movies with serious thoughts and events, but with humor in the delivery and perspective. I like a good narrative and I like to be left with unanswered questions. It is better to get questions from cinema than to get a load of clear-cut answers.

I also like to see ordinary life depicted, especially so when the ordinariness is strange or not so familiar to me. A film about a Jewish middle-aged family man is therefore a good choice with me. And I usually enjoy the Coen brothers (except for No Country For Old Men, which I thought was rubbish).

Up until I went to the USA as an exchange-student in 1999, I had practically no understanding of the vast cultural phenomenon that is the Jewish faith. Since then the diversity of religions, faiths, and spiritualities and their huge place in the every day lives of people has dawned on me more. Finland really is the la-la-land of Lutheran Christianity where it has been criminally easy to ignore religion all together and deny its effects on culture.

I am forever interested in asking the questions of what we are doing here and where we are headed in the universe. A Serious Man depicts a man greatly in need of answers to these questions but what do the rabbis of his little town have to say? Nothing helpful really.

The Coen brothers seem to be saying that the old days when stories and narratives told by our social leaders no longer satisfy us in the search for answers. Yet, isn't cinema just another one of those answering machines spewing narrative at us?

Nick:
It's terrible when you invest your emotional state and well being into something, even if it's important, and that something let's you down. Crushed, destroyed...no other words describe my abject disappointment. I keep asking myself every time if it's worth the involvement, so exhausted and drained I'm left feeling after each event. This terrible feeling has been bought on by Italy's exit from The World Cup. I don't take this lightly, it means so much. Well, I still have England to cheer for...

Still, there is something that connects the latest Coen brothers' picture and Italy's World Cup exit. There has been much talk of Italy being cheats, boring, negative and thank god they're going home and so on. Stereotypical observations on Italian football and culture. Of course The World Cup will be less interesting without them. The current Holland team, unlike Dutch teams of the past, really don't have any sexy football spark in their body. Dirk Kyt? The antithesis of sexy football (or football in general for that matter). Really, you'd have nightmares about the thought of Dirk going down on you, Cannavaro on the other hand...one can only dream!

So, back to A Serious Man, this film concerns a certain Jewish family in some mid-western town in 1967. It questions our notions of Jewishness to some degree. Leave your Jewish stereotypes at the door. Professor Larry Gopnik (the excellent Michael Stuhlbarg) over the course of the film, watches his life fall apart. Seeking some answers from his Jewish faith, Larry hits a brick wall where there should be wise perspectives on his problems. Things continue to deteriorate to the point of fatality. Or do they?

As the nudges to Krautrock littered The Big Lebowski and Simon & Garfunkel were knowingly referenced in Intolerable Cruelty, for A Serious Man, Jefferson Airplane are the musical touch stone. In this world, the Airplane hold all the answers to meaning. The mostly unknown cast excel here, a brave move from the Coens' not to rely on 'stars'. There are some stand-out trippy scenes, where the Coens' usual inventiveness come to the fore, but the strength of this film is in the storytelling. From the unrelated fable that starts the picture to the unfolding small town drama, the Coens have made their most personal film to date. One of the best new films I've seen in a long while, the Coen brothers haven't reached these heights since Barton Fink or Miller's Crossing all those years ago. So, in one word, A Serious Man is essential.
Email Post