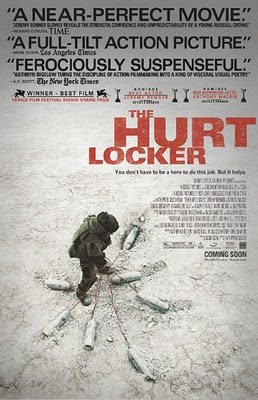 Astrid:
I have discovered tense and threatening films as a way of anti-stress treatment: if feeling stressed, watch something more stressful and your own worries seem smaller. Or do they?

Unlike many films about war, The Hurt Locker is not focused on telling the narrative from a perspective of opposite forces. The core of the story is the daily work and routines that one deactivation unit in Baghdad go through. The premise is interesting and aims at not making judgments or political claims. I think the film manages to steer clear of these until the very end, but then it does deflate some of its own goals.

While it is an interesting attempt as such to make a war film situated in such a current and devastating scenery as Iraq, the obliqueness of an American director is simultaneously dubious. But at least seeing the movie and also its status as the first Oscar winner for a woman director, forces me (and others) to reconsider and remember Iraq. It is so easy to forget here in Finland and that I am ashamed of.

Ultimately, I'm not sure if an action film like this will work as anything more than a two-hour break from reality for most people. Unlike me, not everybody gets so worried about war when they watch a movie without politics.

Nick:
After all the fuss about ex-husband and wife dueling for Oscars earlier this year, Bigelow beat James Cameron. Many claimed it was great that the major Oscars went to the the intellectually superior The Hurt Locker and to a woman director for the first time in Oscar history. Agree on the director bit, but regarding the intelligence of this picture,  I just don't see the great depth here. I was expecting so much more. The Hurt Locker is shallow.

Bigelow is a great action picture director. From Vampire pic Near Dark, to woman cop on the beat Blue Steel, Point Break was the first film that really resonated with the public. There have been disasters too, like Strange Days &  K-19 .  The Hurt Locker hits the ground running. You are sucked into the most intense sequence after sequence following an elite bomb disposal squad in Iraq. This is the power of the film.

Jeremy Renner plays Sergeant James, who against his squad's wishes takes actions to the limit. The adrenalin rush of dismantling bombs is the thing that keeps James going. These are empty lives on the screen. At one point  Bigelow tries to give James some conscience, but this goes against the grain of the character and lacks credibility. The facade of realism the film tries to achieve is broken by some Hollywood plotting. One worrying aspect of this picture is the non-portrayal of Iraqi people. They are a silent witness or compliant terrorist but rarely human in The Hurt Locker.

I think we've been here before.  Apocalypse Now, The Thin Red Line, Platoon and so on have dealt more powerful yet balanced pictures of modern warfare. There is nothing groundbreaking going on here. After watching this picture I got the feeling I'd just watched a very long recruitment add for the US of A army. It matters not weather Bigelow is a woman or a man, The Hurt Locker borders on offensive.