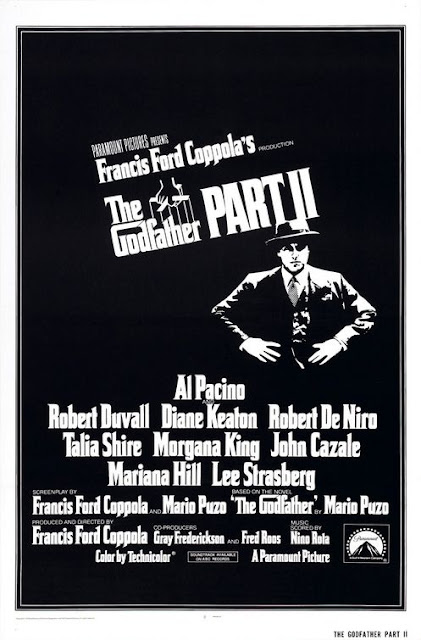 Nick:
I lost my broken reading glasses just as I was about to write this. A serious hunt has left me glasses empty. I actually ordered a new pair last week, but they are late. So, my lack of specs informs my view.

Sequels never live up to expectations. The Godfather was a special film. Part II hones and improves the formula. It looks better (which is some achievement considering the first film), it provides us valuable back story with the early life of Vito Corleone in 1920's New York. It also gives us the most sullen, stressed, lonely and unhappy anti-hero in modern cinema with the character of Michael Corleone. Pacino is a moody sod in this picture.

De Niro is dancing as the young Vito in sharp contrast. The family is the thing. You also realize watching The Godfather: Part II  that by dispensing with Robert Duvall from the disappointing Part III (due to not offering Duvall enough money to reprise the Tom Hagen role), Coppola removed any sense of moral perspective from the last film. My only criticism of this near perfect picture is not enough Diane Keaton. She brings the quirk.

My father was from Sicily, so I heard the dialect much of my young life. De Niro's Sicilian accent is marvelous. What method. The final shot of Michael is one of the greatest shots of any movie I've ever seen. Even more special.

Astrid:
Admitting that I like Godfather II makes me feel guilty – it's like pizza and smoking and tight abs. They contradict my vision of myself. At least, I can happily report I was a little bored by Michael (Al Pacino) with his permanent frown by then end of the film.

But I was never bored with Robert De Niro as the young Godfather. I loved Diane Keaton's absolute misery. I cannot get enough of the Italian and Sicilian spoken by the actors, the close-knit family, and the insane measures taken by men to protect it. In fact, it's not just the successful cinematic storytelling and the look of the film, I cannot get enough of the monstrous politics of the mafia.

Some idiot in me feels safe on the couch when there is a strong leader of the family giving orders to assassin, when sons follow fathers into his line of shady work just because the honor of the family goes above individual needs. The idea that as long as my pups are safely in the same boat, the outside world does not matter can quickly turn to mean: we have to kill the outside world to keep the pups safe. And then: we have to kill the bad pup on the boat to keep the family safe...And I am still snug on the sofa.

Emotions do not matter, individual needs do not have a place, women and children are simply commodities (unless they are sons). Yet, revenge is sweet and always personal.
Email Post