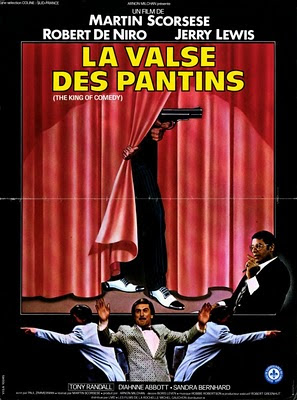 Nick :
It's been a bit quiet here the last week. Various reasons, work, work, songwriting, not being home, but utmost, THE WORLD CUP! So,watching football has been, when home, the evening's entertainment.

Just before the kick off a week ago, we managed to find time to revisit Scorsese's King Of Comedy. Could this be Scorsese's ultimate moment (and De Niro's while we're at it)? Prior to the sublime Larry Sanders Show and more recently The Office, King Of Comedy captures on celluloid a certain embarrassment and uncomfortable feeling that you often feel for people who are a little sad, think they know everything and are actually mentally ill. Rupert Pupkin (De Niro) is often excruciatingly annoying in his self indulgent fantasizing. He's the  flip side to Travis Bickle, aggressive in his assertion that he deserves a break. They have similar career trajectories. This film is so dry in it's depiction of fan worship and lonely people.

It raised a few questions in my mind. Although famed for his gangster pictures, it's just possible that Scorsese is at his best when he does quirky. Think After Hours, Alice Doesn't Live Here Anymore and the incredible New York, New York.  I also wonder why Sandra Bernhard hasn't had a serious acting career after her role here? However good De Niro and Bernhard are, the movie belongs to comic icon Jerry Lewis, whose on-screen Jerry Langford comes over as shallow, lost and disinterested with his lonely celebrity life. His kidnapping is probably a boredom shattering highlight. I wonder if Langford can play drums as well as Lewis?

Again, New York is the back drop to the film, street life evolving around the actors. There's even a blink and you'll miss it scene with The Clash. Embarrassing and cruel, yet very funny, I'd love to see Marty re-discover his quirk like this.

Astrid:
I have been the warm-up act to Sandra Bernhard's comedy show. Yes, in Minneapolis, Minnesota.
For two nights (or was it three?). There we were misplaced the both of us more or less. I certainly did not know how to rise or lower or somehow to adjust to the situation: very privileged Americans sitting down at their round tables, eating their 100 dollar lobsters. Think of the sound of lobster cracking and clicking against forks and knifes. And there on the stage behind a very nice grand piano, me with no jokes to tell at all.

But Sandra was angry and she made the audience know that she was being funny and entertaining, yet at the same time she hated the people at their round tables. Blue and white table cloths and very dim lights. She was scary and unpredictable and never at a loss for words.

She was a star. She had made it. She was wearing a Prada dress and Manolo heels and she admitted to seeing the irony right there. But nevertheless she had come a long way from being the unknown young woman ranting and raging in The King Of Comedy. She had benefited from the fame machine and on some scale what happened to Rupert Pupkin (De Niro) at the end of the film happened to her.

Success. Fame. TV, film, book, magazine. I, on the other side of the world, may still be trying. And I definitely need to rant more and learn to tell jokes.