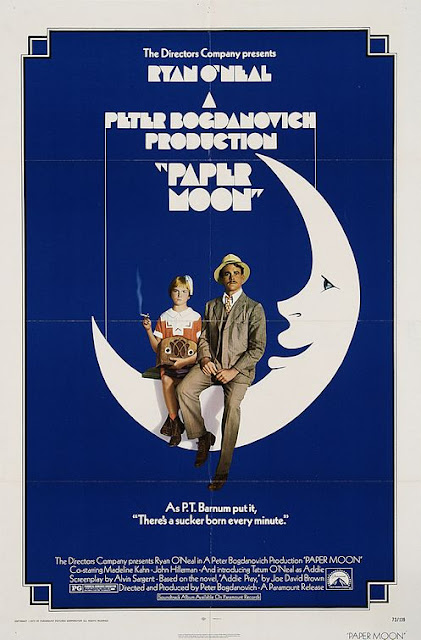 Astrid:
We watched Paper Moon with an 8-year-old whose initial scepticism was soon wiped out by the little girl in the film. She is just nine, her mother dies and she is left with nothing except her wits and a hustling man who turns up at the funeral and is lumbered with the child. They become a version of Bonnie and Clyde.

I realize now that I was actually concentrated on how the child would take the film rather than anything else. She went from thinking the girl was a boy to thinking she's very pretty as a girl. She admired the girl for smoking in bed (!) and for yelling at her companion in public. The undercurrent here is the question: is he her dad or not?

Paper Moon is rated suitable for 7 and above in Finland. Some of its content seems a little heavy-handed for small children, but then again, life's an adventure and Paper Moon certainly shows a good time to little people. During the movie there is heavy hinting that the girl's mother was a prostitute. The sexual availability of some women is central to the plot in other ways as well. There are no endearing little home-maker women in this piece. Then there is the dishonest way of making a living through conning people, the smoking in bed and the general shady side of life...

That's why the 8-year-old had tears in her eyes in the end, and so did her dad.

Nick:
Bogdanovich has had a recent revival. First came his cameo appearances in The Sopranos as Dr Elliott  Kupferberg. He then directed the excellent Tom Petty documentary Runnin' Down a Dream (2007). But Bogdanovich has really been in demand as a film historian. Countless DVDs have his commentary, many books have his introduction, he's the man to go to. Of course, this is how he started his career, interviewing and writing about cinema legends John Ford, Howard Hawks and Orson Welles, amongst others in the mid-60's. He was also along with Spielberg, Lucas, De Palma, Scorsese, Coppola and others one of the leading directors of the "New Hollywood" movement of the late 60's and early 70's.

Paper Moon follows the Oscar winning success of the Last Picture Show and the Hawksian What's Up, Doc? Its a depression era-comedy starring real life father and daughter Ryan and Tatum O'Neal. 10 year old Tatum wooed me as the kid (and the Oscar Academy) her performance is the thing. Ryan does OK as the Errol Flynn type on the take, and the father and daughter have great chemistry.  Lazlo Kovacs B and W cinematography is elegant yet crisp. The script is sharp and the homage to 30's and 40's Hollywood is nicely pulled off.

Bogdanovich manages to keep sentimentality to a limit, and this original conceit of a road movie is a great way to spend a Sunday afternoon.  Bogdanovich has had at times a controversial and very up and down career. He could always retort, "I was with the young Cybil Shepherd" His movie smarts inform his films, but don't let that put you off. This is a small, almost forgotten gem.
Email Post