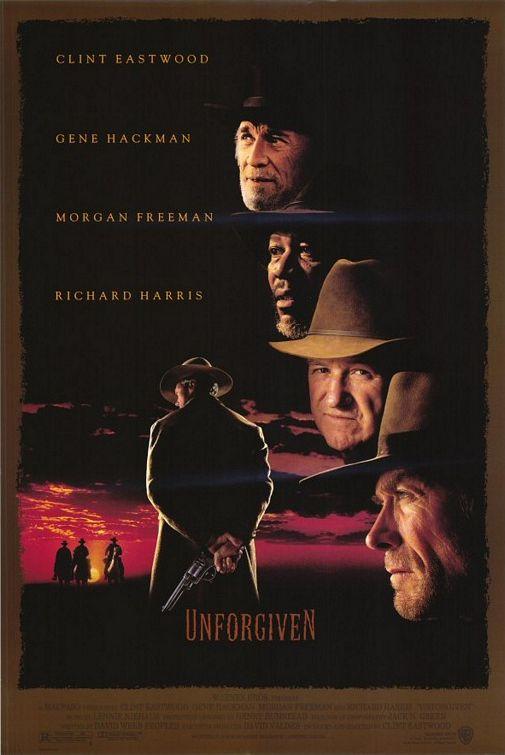 Clint Eastwood's elderly farmer has a dark past which he does not forgive himself. He does not forgive the village for their inability to protect their own women and no one forgives him. He has been a changed man for years, bringing up his children in poverty nearby his dear wife's grave, but to the outside world he is always the ruthless killer that scared everybody even if they just heard his name mentioned.

Unforgiven describes a world where justice does not get protected by the law or a sheriff, even though these institutions exist. People are guided by their individual morality, they are alone seeking for their rights to exist. Revenge is a a logical mechanism in a climate where forgiveness is a life-threatening utopia. Really, in this scenario to forgive would mean to surrender and to give up one's life rights.
Forgiveness was a luxury in the Wild West. But can we still claim that today?

Nick:
People's perceptions of who you are rarely change, even when presenting evidence contrary to hard worn belief. It's a natural conclusion one can draw, it's especially relevant when discussing celebrity, we are after all lazy beings. Take Clint Eastwood. The perception people still have of Eastwood is the liberal conservative toting a big gun. He's popular (immensely) and his hard, iconic on-screen persona has betrayed his talent as one of the great mainstream film directors of the last 40 years. Of course, this perception has changed slightly over recent years (with Oscars comes respectability), but he'll always be remembered for  the "make my day" line. I could argue that prior to Unforgiven (the movie that made him welcomed by the movie establishment), Eastwood had directed some unfussy and occasionally brilliant movies. Personally, he's yet to better The Outlaw Josey Wales, in not just Western terms, but as a piece of cinema in any genre. It's one of my favorite films ever and the fact that I rate Unforgiven close to it, should give you advance to some of my feeling here. Unforgiven also has a bonus as being Eastwood's best on-screen turn.

I grew up in Staines, and I do recall going to see Unforgiven at the local cinema on release. That old cinema went years ago, a multiplex nowadays supplying the local public their celluloid thrills. I do remember that the cinema housed all my growing movie experiences. I remember going alone to see Unforgiven and some 3 other people being in the cinema with me. In isolation, Unforgiven was a majestic beast that validated those of us that knew Clint was the man. My opinion hasn't really changed. I've watched this film so many times. It's slow to unravel, intense, and occasionally reveals gentle mocking humor. Eastwood always uses natural light which means the look of the film has just got better over time. All the performances are standout, especially Morgan Freeman and Gene Hackman. But Clint waited to play this role, he knew he had to be the right age. Yes, there's echoes of Henry Fonda here, but it's The Man With No Name referencing his own past, specifically High Plains Drifter and the Preacher from Pale Rider, Eastwood's William Munny in Unforgiven could be these same charters a few years down the line.

So this is the deal. We get Eastwood debunking his own iconic screen persona of the previous 30 years for most of Unforgiven. He's trashing The Man With No Name and the callous violence of Dirty Harry and countless other cool shoot'em ups. Eastwood has pursued this theme for a lot of his post Unforgiven pictures (Mystic River, Letters From Iwo Jima), this was a turning point. Eastwood shows us the futility of taking someone's life, the key line in the movie, delivered by Eastwood's rejuvenated Munny being:"It's a hell of a thing, killing a man. Take away all he's got and all he's ever gonna have." But Eastwood can't leave it alone. The thrilling last 20 minutes of Unforgiven remains some of the most intense cinema I've seen. Eastwood's scraggly features redefine for us his screen persona and deliver the ultimate vengeful angel of death. It's hardness unparalleled combined with a laconic cool only Eastwood's iconic cowboy persona can deliver. It's the soul of Unforgiven and it's unmissable.
Email Post