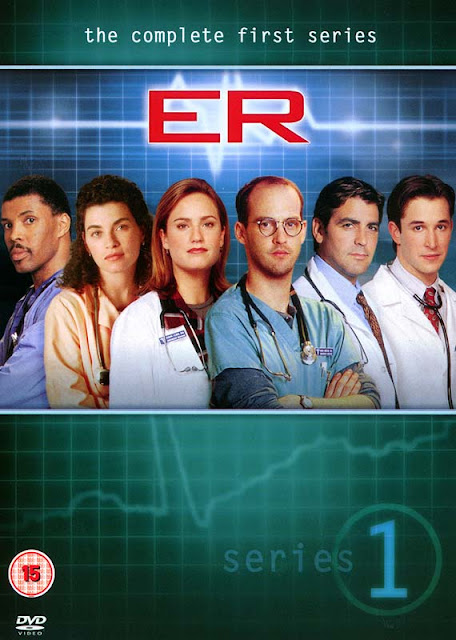 ER is famous for taking the hospital drama into a more realistic direction than home audiences were used to (although M*A*S*H certainly didn't spare the blood or the political/social commentary in the 1970's). ER is mostly focused on the emergency ward of a Chicago County General Hospital and with the young resident surgeons and doctors who treat patients under the most trying circumstances and in never ending shifts. Scenes are gritty and technical yet over the course of Season 1 we get to know the key characters intimately. The main cast of Anthony Edwards, George Clooney, Noah Wyle, Sherry Springfield and Eriq La Salle are all excellent. As the season moves on we get more personal with each central character and their lives away from the ER, but it's the hospital where ER excites and, at times, traumatizes.

Yes, ER can be a massive downer. It can also be sentimental and George Clooney can be the smarmiest arse. But this is minor. ER is top TV series fodder. It has been incredibly popular and holds all sorts of records. I've heard the standards of the first season were maintained throughout it's 15 (!!!) seasons. If so, it's deserved its success. I cant wait to tuck into Season 2.

Astrid:
When I was an exchange-student in Michigan in 1999, my mother based her idea of what my surroundings were like on ER. Sure, I went to Chicago once with a symphony orchestra of teenagers to play a show at a Hilton hotel downtown, but other than that my life was nothing like the characters' in ER and Chicago remained a stranger to me. I came to ER later, possibly when I returned back to Finland in 2000 and my mother was still watching the series because it was so good. I remember being surprised that my mother liked a show about a hospital emergency room with doctors and nurses as the main characters and with a lot of fast paced technical talk and blood.

ER ran on Thursdays in Finland. It went on for years and so when I had moved out from my parents' to live with Nick, I continued to watch it. Or actually that's when I began to really follow it. The characters became people I really cared for – I cried every Thursday on my own while watching ER, because Mark was dying and Carter was going to Africa and patients died and the women were often so unlucky in love...The important point is: I was always home alone on Thursdays when ER was on.

During the resent months my taste in entertainment has narrowed to accommodate the pregnant brain and emotional state. Yet, I was surprised to find myself needing to watch ER again. Surely it would be too gory and heavy...people dying and being born all the time...But I wanted to start from the beginning and share ER with Nick, who was always working on Thursdays back when we still had a TV.
ER: Season 1 did not disappoint. Even when the series is nearing its 20th birthday, it doesn't seem dated. I guess that's because it deals with such fundamental issues and everyone's wearing a white, green or pink doctor's coat, which don't seem to change in look ever. One of ER's best features is that it is easy to insert oneself into the series and therefore reflect on my own life. There's always something familiar there: some experience, fear, situation or a character to empathize or identify with. Still makes me tearful and wanting more.
Email Post