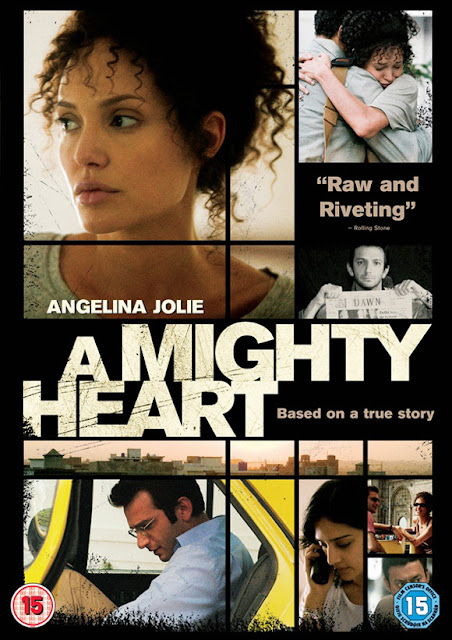 Nick:
The war in Iraq seems an age away now. 10 years is a long time. So much pain and loss on all sides.  It's war based on a brazen lie from supposed civilized nations. Coupled with the arrogance that we are dealing with supposedly inferior people living in different cultures we dare not understand, our trail of destruction raises all kinds of moral questions. But we can afford to ignore our own moral dilemmas as our lives are enveloped in materialistic temptations and those troubles in far off continents just seem like something happening over there. Winterbottom has repeatedly tried to draw us back into messes our governments have often shirked, giving us real events dramatized in his dry/semi-documentary style if not an actual documentary. The Shock Doctrine (2009) The Road To Guantanamo(2006) Welcome To Sarajevo(1997) and A Mighty Heart all deal with war in modern times and its various repercussions. Winterbottom has form and doesn't shirk from showing the uncomfortable.

A Mighty Heart is another movie where Winterbottom manages to work with top-draw Hollywood talent on a low budget. So, amongst Winterbottom's often difficult and challenging oeuvre you'll find the likes of Jessica Alba, Colin Firth, Steve Coogan, Kate Hudson, Milla Jovovich, Kate Winslet and Woody Harrelson slumming it in often political, generally top quality, yet weird films. This time, it's Angelina Jolie, taking a trip out of her comfort zone and messing with the rough trade to show she's got the chops to be taken seriously. And she's good in A Mighty Heart. Winterbottom rein-acts the real life kidnapping and ultimate murder of Wall Street Journal journalist Daniel Pearl in Pakistan with his usual no thrills. The focus is on how Pearl's pregnant wife Mariane (Jolie) deals with the often confusing search for her husband.

Winterbottom bravely shows possible logical reasons as to Pearl's murder by Islamic fundamentalists he was supposed to interview before he and his wife were due to leave Pakistan. Was it because of Guantanamo? Because Pearl was Jewish? Repercussions for American involvement in Iraq? Supposed Wall Street Journal coercion with the CIA? Or because the Pearls housed an Indian helper who was possibly looking to discredit Pakistan? Winterbottom considers all options to the kidnapping/murder that nowadays is simply put down to an al-Qaeda killing.  A Mighty Heart despite this, still works as drama. That Mariane Pearl, a journalist herself, emerges from A Mighty Heart as a human being with great compassion and willingness to understand difference in the most trying and horrific circumstances, is something we could all learn from. Up to his usual high standards, Winterbottom's picture is a powerful reminder and lesson in tolerance.

Astrid:
In 2007 there was still a sense of urgency about understanding what was really going on with the USA in Iraq, Afghanistan and the neighboring countries. I had that need too and wanted to see A Mighty Heart immediately when it came out. I did not see it, for some reason. Now, at the end of 2011 there is a deflated helplessness and resignation to all things evil – I mean that the general feeling, the media and individual people seem to be much less attuned to asking what is still going on. I'm talking about a perspective that's strictly Scandinavian, far-removed from the streets of Pakistan for example. (I imagine it impossible to not ask those questions there every day.)

In this climate watching A Mighty Heart seemed out of place. It did not feel right to view it as pure cinema, because of its depiction of real events and people. It did not seem right to view it as a superstar vehicle for Angelina Jolie either. As a movie or a series of acting performances there was nothing that impressive about the film. Yet, time had passed and the film had lost some of its political urgency, which I can imagine was shocking still in 2007.

Then again, as the end credits roll and remind you that Mariane Pearl is now living with her son in Paris, the realness of it all hits me. Despite the movie's end or the Western world's gradual disinterest in their own hateful mess, the husband and father Pearl is never coming home to his family.
This simple point should end all conflict and prove futile the logic of hatred and warfare. It seems that the Pearl family knew this and know it still, after their personal loss. It is still important to make films about what is really happening around the world – sometimes cinematic values become secondary to the need to tell the truth. Injustice will not end through ignorance.
Email Post