Under the Volcano (1984) Directed by John Huston 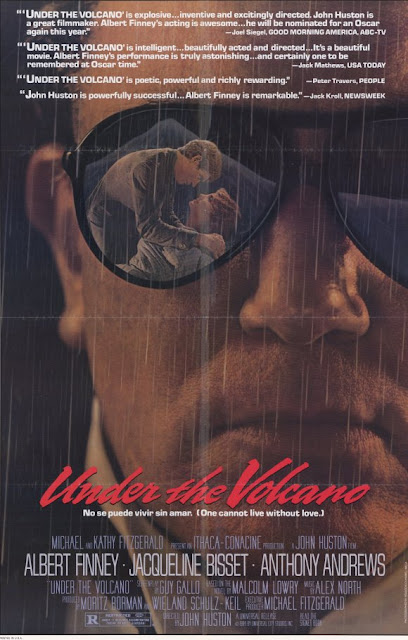 Nick:
Moving to Finland 12 years ago was quite a culture shock for me. Not in the sense that it was some culture free zone, but in respect to the culture of drinking. I come from England where heavy drinking from an early age or going to the pub every night is almost a birth right. Finnish drinking just operates at a different level. Social drinking was a ticket to get to know many people in a short time. I've always been a very slow drinker and not one to indulge too much in the art. But my first year in Finland was very much a drunken haze. I quickly moved on from this just to adapt to my new situation. Still, in my capacity as a record producer for a zillion young bands over the years, alcohol has been a constant accessory to many artists. A certain level of alcoholic incapacity is accepted in Finland, it's a normal part of the fabric of life. Or that's the way it seems to me.  I'm only telling this because Albert Finney's portrayal of alcoholic diplomat Geoffrey Firmin in Under The Volcano is behavior I've witnessed at various times over the years (and not exclusive to Finland I may add).

Finney's turn could be the best drunk on screen I've seen. John Huston was near the end of an amazing directorial career. His trademark slow pace, rich character and dry dialogue  are all present here.  There is some back story: Under The Volcano is set in one day in Southern Mexico just before the outbreak of the Second World War. Firmin lives with his half brother Hugh (Anthony Andrews in a very Dirk Bogarde like performance), slowly drinking himself to death. His wife Yvonne (stiffly played by Jacqueline Bisset) returns from America to save their marriage. The trio venture out for the day, Firmin increasing his alcohol intake as the trip progresses, raging at all and sundry, fading in and out of focus. He has no interest in saving his marriage (after an affair between Hugh and Yvonne), he cares not for the coming war, the local political unrest, he just wants to drown in self pity and the bottle.

Under The Volcano is grim, but Finney is electric. The last half an hour set in a remote Mexican whore house is disturbing and harrowing viewing. It twists the knife and is uncomfortable to watch. The Mexico of this time is viewed as surreal and nightmare like.  Finney is as brave as anyone for taking this role. Huston spells it out: You just can't help people if they don't want it, even if tragedy is apparent. The saddest thing? I've known people this fucked up by the juice.

Astrid:
It seems that movies are as in love with alcoholics as everyone else. Contradictions are forever fascinating and what condition would be better in illustrating the claim than a staggering diplomat alcoholic?

Under The Volcano is set in Mexico at the very Eve of the Second World War. Mexico acts as a strangely beautiful and rich backdrop to a complete descent into deadly depression. The political climate, or Firmin's (Albert Finney) post as a diplomat do not matter in the story actually. It is the portrayal of the alcoholism that ultimately makes the film claustrophobic and gives it its power. It's a close-up on a death wish.

Firmin drinks to get sober and to get drunk. He drinks bottles of liquor as if they were water. Sobriety has become a foreign state to him, much like his home country and his loved ones. He is well past hiding his drinking and his wife has left. The only one left is his half-brother (Anthony Andrews), who was having an affair with Yvonne, the wife, before she took off.

Despite these facts, Yvonne comes back to her husband. She believes in a new beginning, even if she doesn't believe her husband will be sober in it. These dreams are soon destroyed as the reality unveils in front of her hopeful eyes.

Is it the alcohol that kills them, or is it coincidence? I have rarely found such a realistic and unflattering depiction of alcoholism in films, where characters can usually down unfathomable amounts of booze without concern. Unlike in Leaving Las Vegas, there is no glamor or romance attached to Under The Volcano. Everything is lost. The ending is a little too abrupt still.
Email Post