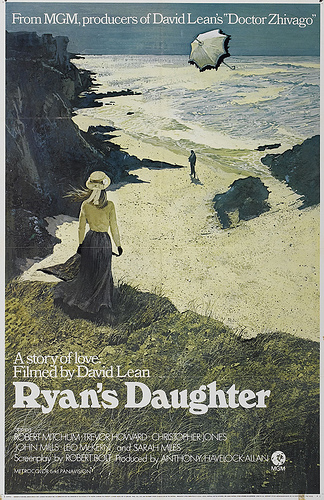 Nick:
Critical consensus in a positive light is something we all strive for in all walks of life. We all want our friends to appreciate us and our peers to accept us. It is churlish to think otherwise. Yet, at times we all encounter situations where our actions do not  meet the approval we would like. Working in the field of music all of my life, it's been interesting to see how the critical community works from different perspectives. In recent years, there seems to be a critical view that artists should take on board general critical responses to their work. I don't accept this. However much I appreciate some critical commentators, I don't need them informing my creativity at all. Yet, I think about this blog and often I can be found dishing out scathing commentary. I wonder if a unanimous rejection of someone's efforts can force them to stop all together? This certainly seems to be the case for David Lean and his film Ryan's Daughter.

The critical reaction to Ryan's Daughter at the time of its release seems to have been universal ridicule, which hurt Lean so much he went into a hiatus from making pictures for many years, actually only making one more film in the 1980's. Is Ryan's Daughter that bad? Ryan's Daughter is certainly a film out of time, its classical storytelling and slow pace, almost fantasy like imagery is in stark contrast to a more realist film making that was prevalent at the end of the 1960's and early 1970's. Yes, this film is old-fashioned. Historically, as in many of Lean's epic pictures of this time (Doctor Zhivago, Lawrence of Arabia), any accuracy is pretty much forsaken. Set in a small Irish village just before the 1916 Easter Rising, this is a rather cliched picture of the fledgling IRA and the depiction of the Irish people  seems very patronizing. The British are crudely portrayed as imperialist swine. As The Troubles raged in 1970, Ryan's Daughter simplified version of these earlier events must have seemed very quaint.

But if you were to forgive these problems with the film, there is much to admire. Lean never lost his eye for a great scene or framed composition. Ireland has surely never looked this good on film, in fact, few films have looked this good. Period. You could just watch this with no audio and be blown away by what you see. Is this not the pure essence of cinema? But in silence, you'd be missing out on one of Maurice Jarre's best scores. Or, you would miss the subtlety of Robert Mitchum's performance. Very much cast against type, it is worth revisiting Ryan's Daughter alone for Mitchum's much maligned turn as Charles Shaughnessy. Throw in a sensual role for Sarah Miles as the sexually hungry Rosy Ryan, whose indiscretions are the real heart of this picture, and real substance appears. Trevor Howard is effortlessly great as the stern Catholic priest of the village. Ryan's Daughter is a much better film than Doctor Zhivago, and not far from the great heights of Lean's best picture Lawrence Of Arabia. David Lean still understood the power of cinema when he made this film. It was to take you somewhere you had never been before and show you something through his own vision. In this respect, Ryan's Daughter is ripe for re-discovery.

I am learning to appreciate cinematography as a potent tool for narrating through the depiction of landscapes. Nature and its large and small features, weather conditions, light; these can add emotion to narrative. In fact they can be the emotion. Where people are reserved, nature seems to often act dramatic and over-powering. Ryan's Daughter portrays such a romantic Irish coastline full of nature's contradictions that I found myself wishing to live there.

Yet, the film depicts the small village as a place of control and of great suspicion towards newcomers.
The church rules over the population with one drunk priest. But where his eye does not see, there is hatred, jealousy, poverty and meanness.

As long as I am talking about something else than desire and pleasure here, I am derailing from what matters in Ryan's Daughter. It is a portrait of a young woman finding her sexual drive and need. Her quest is both socially accepted (in the form of marriage) and denied (her affair to an English soldier on a break from the front lines of the WWI). The contradiction is the crux.

Ignorance and innocence mixed with a desire for pleasure has long been a certified cocktail of trouble for women. It also makes for good movies.
Email Post