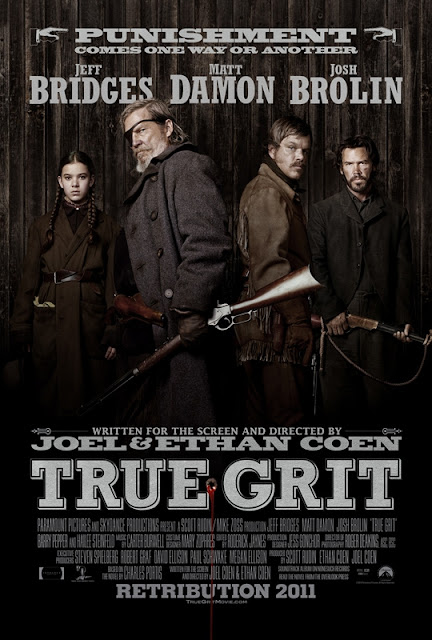 Nick:
Prefab Sprout's "The Gunmen & Other Stories" is my least favorite album by the band. Paddy dipping his toes into Country & Western music was always going to be a bad idea. Even though the album contained a couple of gems, the Prefab's never convinced as Cowboys. When I found out the Coen Brothers were making a real Western, for a brief moment I thought: would they fall into a Prefab- sized trap and get lost on the prairie trail? Well not actually. One has only to look at the Coen Brothers filmography to realize they've been making Westerns all the time. Blood Simple, Raizing Arizona, Fargo, O Brother, Where Art Thou? and No Country For Old Men could have all been played out as Westerns.

True Grit has been greeted with the fanfare that greets any Western nowadays, so rare they are. It's a remake of a John Wayne picture from the late 1960's that is pretty decent itself if memory serves. The Coen Brothers claim not to have paid attention to the Wayne version from 1969, instead basing their film on the original novel written by Charles Portis in 1968. Several scenes in their remake really echo the earlier film, such as the grizzly US Marshall Rooster Cogburn all guns blazing on horse back in a one against four scenario. 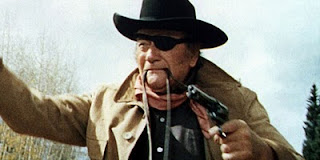 The original scene is pretty iconic stuff, Clint Eastwood stole it for The Outlaw Josey Wales, and here it appears again. The Coens being such film geeks seem unable to resist a little nod to Wayne  the Icon. When Jeff Bridges (playing Cogburn) appears at the opening of a mine shaft, all silhouette, it's  a homage to Wayne in The Searchers and one of the most iconic shots in Cinema history.

But is True Grit  2010 any good? Yes, it's excellent. The film is not quite up there with Eastwood's Unforgiven as a postmodern Western (few films in any genre are), but it holds its own against pictures like Open Range, Deadwood the TV Series, and the movie it most feels like, Jim Jarmusch's wonky, revisionist Dead Man. There are a few typically eccentric Coen scenes, but mostly True Grit plays it straight, with a tight script and excellent cinematography. Jeff Bridges, Matt Damon and especially Hailee Steinfeild carry the film with solid performances. My only real grumble is the ending, which seems unnecessary (no spoiler here), when there seemed to be so much more story to tell. True Grit is the best Coen Brothers movie in a long while. I'm glad to have a new Western picture too. I'll be revisiting it again, I know.

Astrid:
They forgot to put Heilee Steinfeld's name on that poster. She is Mattie Ross, a daughter who wants to get revenge for her father's death. She is on screen more than anybody else in this film. If anyone has true grit here, it is her character.

It is too bad that the Coen brothers made their True Grit so explicitly violent, because now young girls cannot watch it. Without the violence, it would be a great story of empowerment for preteens and teenage girls. I know a nine-year-old who loves Calamity Jane and who would love Mattie Ross' narrative even more.

I congratulate the Coens for their portrayal of Mattie Ross. Forget the young girls I was talking about – I felt empowered by her story. In Mattie the Luise M. Alcott -style girl characters get put into the genre of the Western. And discounting a little spanking, Mattie gets through the two hours without the usual rape and other sexual violence scenes so mandatory with any women characters presented in the Westerns.

Of course the Coens have been very interested in what Mattie unleashes and reveals about the men in True Grit. Is the Dude just a nasty dude or a dude with heart? Is Matt Damon generally a little repulsive or is he actually a good actor?

And by the way, Heilee Steinfeld and Annette Bening should be up for the Best Actor Oscar. That's an opinion I hold. – yes, I know they are women.
Email Post