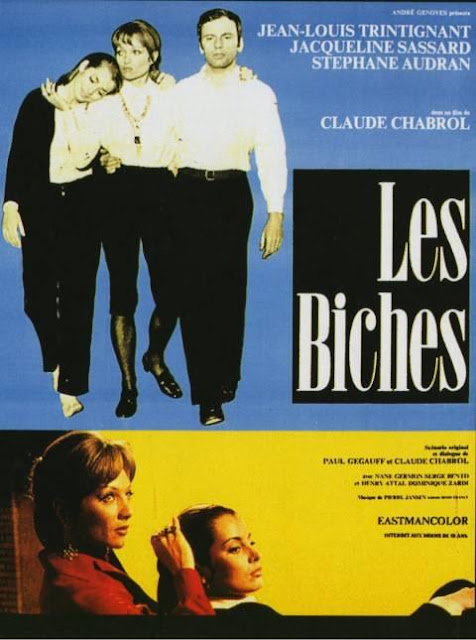 Astrid:
Have you noticed how cuteness has become something to aspire to? Being cute has been a quality reserved for children and baby animals, something denoting innocence, softness, child-like. But these days adult women are demanding their right to remain cute – or to use cuteness. There are new connotations for cuteness, which can now relate to a certain pink and fuzzy sexiness too. I have noticed and felt the pull of cute.

Before watching Les Biches I assumed the title meant The Bitches. Pardon my non-existent French.
After seeing the film I realized its English title is The Does. Does are female deer. Cute little cuddly things with hoofs. I must add that if I had to tell you what animal I would describe myself as, I would have to pick a deer/doe. But not Bambi.

Why the two women in Les Biches deserve to be aligned with such mystical animals as deer, I don't know. This is a movie about attraction to someone in such an extreme way that it isn't enough to love them, you must become them. There is much left unclear, much unexpressed emotion of hatred and passion. There is beauty to look at, and there is a lesbian love story to be read. There is also a battle between the cute and the regally adult forms of feminine sensuality. Go watch it on a vacuous spring evening!

Nick:
I'm open to suggestions of vagueness. I'm open to empty thoughts and vacuous digressions. I'm into gestures that don't mean anything. I'm into space as art. I'm into nothing ever happening but still feeling special. I appreciate a statement of silence. It's all in the Mise-en-scène. I can dig you brother if you can spare me a dime?

Can you imagine going through life and always being referred to as some other countries Alfred Hitchcock? For Claude Chabrol this seems to be the case. It's even printed on the box that the 8 (!) movie collection of his work came with..."The French Hitchcock". Like the real master of suspense Hitchcock, it says here that Cabrol is also the master of suspense. How many can go round being masters of suspense? But Chabrol is in reality far harder to pin down. He fills Les Biches with atmosphere, raises tension and even suspense at times, but it's all topped off with a weary shrug of the shoulders. Elegance rarely appears like this on screen.

Lesbian lovers, betrayal and Jean-Luis Trintignant is enough to wet one's appetite. Looking forward to the other seven.
Email Post