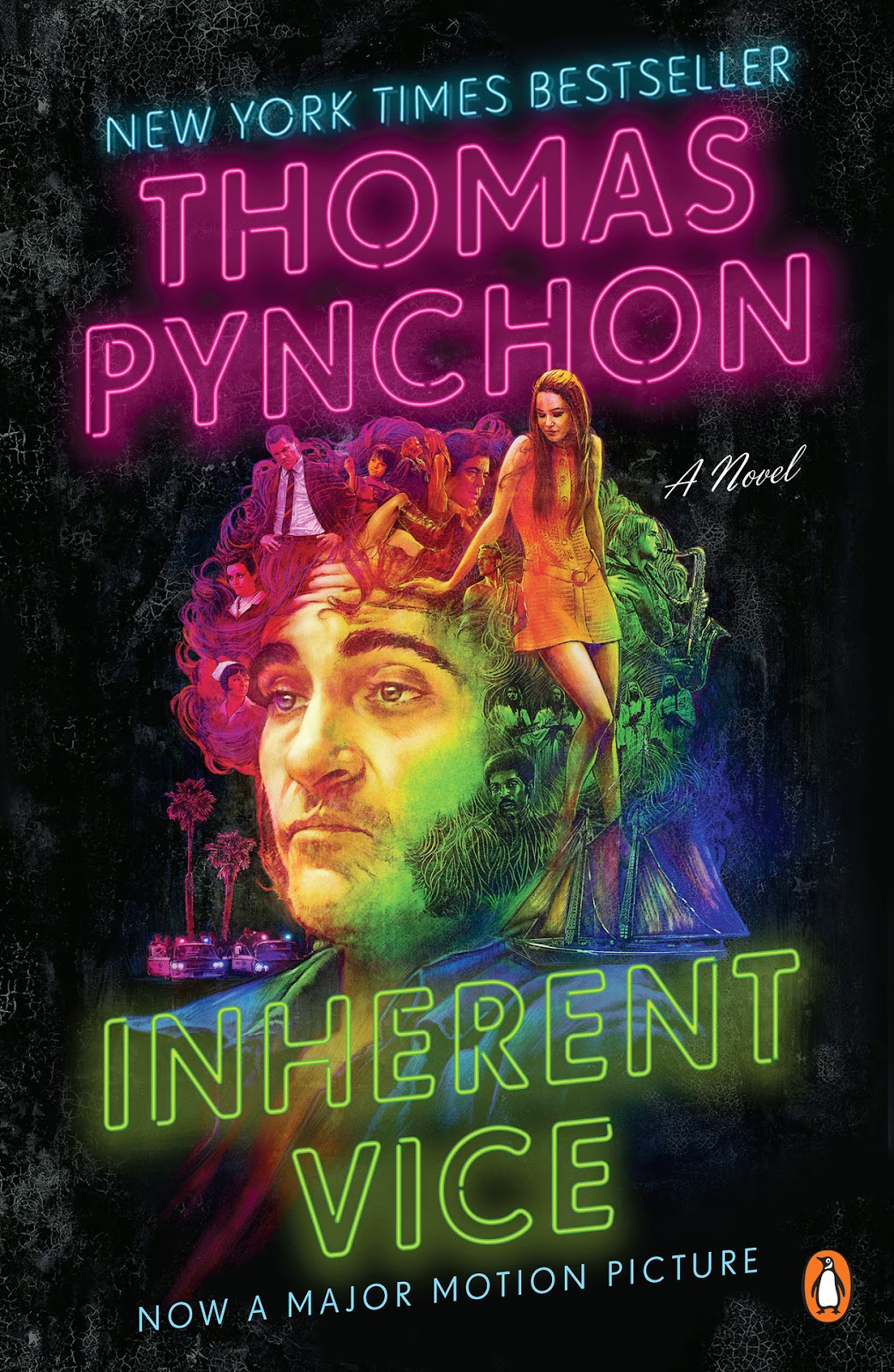 Astrid:
Back in the 1990s when I was a teenager the 1970s was the decade to idealize. As a pre-teen I needed to do my homework on Led Zeppelin, The Doors, Woodstock and Joni Mitchell to name a few icons. Unfortunately a lot of information came from popularized visions such as the movie Forrest Gump (1994) or The Doors (1991). Sources like Thomas Pynchon's Inherent Vice novel did not exist. I cannot help but feel that Inherent Vice is a vision of the 70s filtered through the 90s. It kind of makes sense, as the current trendy past decade that continues to be referenced is the 90s. As Nick mentioned after we strolled out of the cinema (or I didn't stroll, I half-ran because for an hour and half out of 2 and a half hours I needed to pee), the characters and their way of being could have just as well been a portrayal of 2015 hipsters in Coachella. I liked this time and style confusion very much.

The audience in the cinema liked Joaquin Phoenix and annoyingly I sat next to a lady who giggled every time Phoenix appeared on screen. In this movie he was in nearly every single shot. So a lot of laughter and giggle even in places that weren't very funny. Maybe this girl-crush reaction also reminded me of the 90s. Although even then I was both too dumb and cool to admit to having a crush on any leading male...

I did have a crush this time around, but it was for Joanna Newsom. Her voice narrates the story and often what seems to appear in Doc's (Phoenix) head. Newsom appears in the film visually, but her character is possibly only a figment of Doc's pot haze. Nevertheless she seems effortlessly stunning, epitomizing her own harp-playing pixie image with the druggy edge of the LA 70s hippie woman. I could continue a monologue about Newsom but I do need to tell just quickly that the actors in this movie, especially Josh Brolin, Reese Witherspoon and Phoenix were all great – they were really entertaining, funny and also truly touching. That's a lot said with the crazy plot and the dopey feeling of it all. Anderson's aesthetic, his references to classic movies and his non-preaching, yet attached approach to his latest film really works.

Nick:
P.T. Anderson dips into the Robert Altman well of goodness again. And in 2015 it's fair to say why not. It's also fair to say that any debt Inherent Vice may owe to Altman's cinema is superficial at best: Altman's The Long Goodbye is the obvious touchstone, but apart from a couple of similar plot references Inherent Vice really stands as its own piece of quirky cinema. Elliott Gould certainly broke the Philip Marlowe template in Altman's film but Joaquin Phoenix takes the private investigator to new levels of stoned magnificence probably never seen in the movies before. Phoenix's Doc and Inherent Vice in general also have a welcome Neil Young obsession (way beyond Phoenix's sideboard sideburns) – we're talking mid-1970's Young, so it's OK. This just adds extra layers of strangeness and unconventionality to Inherent Vice. Anderson's latest feels more than ever like a film out of time, something that people daren't make in 2015. The executives were probably screaming at P.T. "Paul, people just won't get this rambling mess of a movie".


It's true, Inherent Vice rambles and can seem quite incoherent. It plays fast with plot conventions and the joy for me was just going with the indulgence and diving into Inherent Vice's multi-faceted set-up. Of course I could have been being taken for a ride by Inherent Vice, but Anderson always snapped you out of your stoned stupor by bringing some scenes sharply into focus. Following Doc as he is offered case after case and lead after lead is an intricate web and puzzle and whilst it's easy to get lost, it's also great that Anderson offers us some good laughs along the way to another dead end. Inherent Vice not only plays with plot but offers the usual rich attention to detail that has become such a trademark of Anderson's cinema. From costume to setting and the use of color you can just focus on the look and style of this movie and get lost in it. It's a drug infested LA that we're watching and the beauty of Inherent Vice could be that Anderson's vision of a super stoned LA might really have been the  way it was. Jonny Greenwood's soundtrack fits perfectly here and Anderson and the Radiohead guitarist are building something which will be looked back on than more than special.

But what elevates Inherent Vice into a great movie is the application of the cast. Could Phoenix's Doc be his best performance? He's on screen for the duration, but what impresses is the lightness of touch Phoenix brings to Doc. Josh Brolin in a faintly ridiculous role excels whilst Joanna Newsom as Doc's conscience strikes the perfect natural pose. Then it's a litter of cameo and brief appearances from the likes of Owen Wilson, Reese Witherspoon, Katherine Waterston, Benicio Del Toro and others that create the movie's patchwork of moving pieces. But at the heart of Inherent Vice is love and Phoenix does well to portray the yearning for his missing ex-girlfriend. It is the not knowing what she's doing, who she's with and the innuendo that gets you. Inherent Vice felt like nothing else. The 1970's being a decade that's well represented in recent cinema (even by Anderson himself), but never in such an acutely stoned way. Inherent Vice demands repeated viewing to take it all in, there's so much here. Inhale deeply and get lost in this fever dream, it' swell worth it.