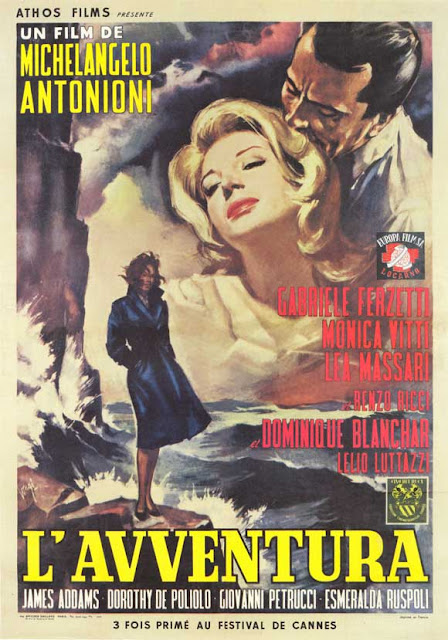 Astrid:
At first L'Avventura was an intriguing poster in our Italian movie poster calender, then it was a 'forgotten masterpiece' that kept popping up in film magazines. It didn't take long to persuade me to feel I should see the movie, but it took some time to find it. We finally did find a copy of the film in London and yesterday we decided to treat ourselves to some intelligent, stylish Italian cinema from the 1960s.

What a disappointment. Nick kept staring into a distance in the periphery of the movie screen. He kept changing positions and he even fell asleep forcing us to take a break from the film. By the last 30 minutes he was openly making loud remarks on how boring and vacuous the movie was. Unfortunately, I cannot disagree with him, although I think I did try a bit harder with L'Avventura. I wanted to give it a chance even after half the film was gone and I still could never be sure if there was one or two leading males and if there was any credibility left for the meandering script.

The film moves from places and scenes wandering slowly. It is clear that not everything is imbued with meaning here, but by the end I feel cheated. It is as if even the things that usually signify something were utterly empty. Death and loss, love and desire all pour out and in. Visual details look like something with intention, but in the end, why should I read anything more into them? Monica Vitti looks divine, but she remains unattached as if suffering from sunstroke or the sheer lack of direction.
I still love the poster though.

Nick:
I've been waiting to watch something substantial. Over the last week or so we've watched the truly dreadful (500) Days Of Summer and the unnecessarily violent and average Guy Richie handling of Sherlock Holmes. It's fair to say some of the pictures we've reviewed on the blog recently have been disappointing for me. I've never seen  L'Avventura. I'm a fan of Antonioni's later films, so a sense of excitement and above average expectation accompanied this viewing. Cinema still holds that thrill.  L'Avventura is heralded as one of the greatest films ever. Sight & Sound tells me it's the only serious rival to Citizen Kane that could be afforded such distinction.

Monica Vitti is an Italian actress I really adore. Stylish and unusual looking for the typical Italian actress of this period, she retains for me a certain personification of cool. L'Avventura made her an international star and was the first of three collaborations with Antonioni (the film also putting him on the map). She looks amazing here. Her presence is enough to carry this film. Visually there is much to stimulate the senses, and nothing more so than Vitti's blond main and face. L'Avventura is noted for inventing a new narrative for cinema, a visual narrative that at the time caused controversy as well as influencing a whole host of art-house film makers. L'Avventura also shows sex as something essentially casual amongst the characters, a depiction rarely seen in cinema up to this point. It's such a shame that after all these elements being in the right place, L'Avventura bored the death out of me. I have to confess here that my mind could not concentrate on the film. It kept wandering.

Any tension Antonioni tries to bring to proceedings, due to one of the main character's sudden disappearance, dissipates through a confused narrative and a series of unending shots of figures lost in rocky terrain. Unlike Blow Up or even the slow moving The Passenger, the mystery in  L'Avventura  soon gives way to an inconceivable romance which so much of the film hinges on (especially the ending). It's a jumbled, non-credible, slow moving mess. I know I could come back to this, at another time and in another year and with the right frame of mind and really love it.  I'll certainly give it another go, but in 2011 L'Avventura was a bore.
Email Post