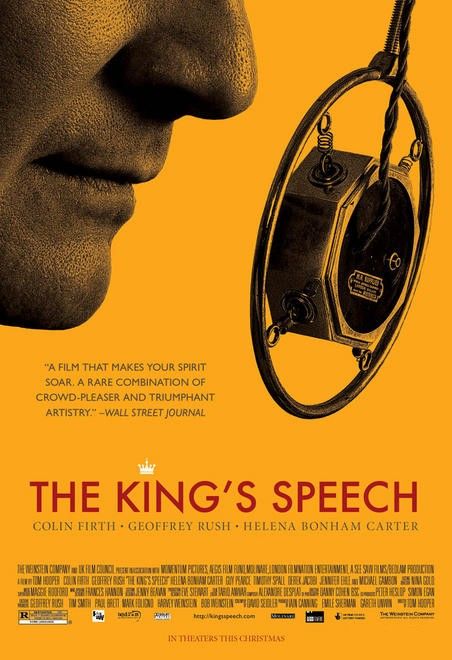 Nick :
What hold does the Royal Family have over the Oscar Academy? It's worth asking as any picture which seems to be based on any Royal family members, current or past, seems to clean up big time at the Oscars – regardless of weather the film in question is any good. Royal movies are Oscar gold dust and even the most calculating amongst us have cottoned on. It must be the same hold that the Royals have on their huge number of fans the world over. The recent Royal wedding spread a far-reaching fever, even in Helsinki people were huddled over their computers in offices watching the latest act from one of the most dysfunctional families. So, now the latest Royal cinematic masterpiece, which, excuse the pun, everyone was talking about at this years Oscars.

As entertainment or even good cinema I struggled with large parts of The King's Speech. It gave me that Merchant/Ivory sickly feeling, you know the kind: show us how the other decadent half live, whilst trying to portray sympathetically how said decadent bourgeois inbred tries to mingle with the common man. The usual role call of British luvvy inhabit The King's Speech (hello Helena Bonham Carter, Derek Jacobi, Michael Gambon, Anthony Andrews & Timothy Spall). Mixed in with some Australian talent (the both excellent Guy Pearce and Geoffrey Rush) and of course the very hot Colin Firth as the stuttering future King. Yes, it's well acted, tasteful, full of reverence to the former King, and maybe even shows how the head of the British Empire used to mean something more then mere tourist trade and scandal sheet. But The King's Speech takes an earth to unravel and leaves me ultimately asking why should I give a shit?  The privilege afforded King George VI his whole life should have given him the confidence to perform his duties.

I miss the urgency and edge that Hooper bought to The Damned United. This feels rather stately and stagy and made with complete approval from The House of Windsor. A bunch of real-life toffs faffing around. The King's Speech, maybe intentionally reveals a man out of touch with "his people" who was vain and was tormented about how he came across. The PR industry has been in full swing forever and probably started with the Royals. Politically, I find this kind of film objectionable for many reasons. We can argue another day as to the worth of the Royal family, then and now. As cinema, The King's Speech is of the distinctly average variety.

Astrid:
I know The King's Speech won a lot of Oscars this year and it was very popular, as well as being a relatively cheaply made film. I just couldn't get interested in the film when it came out. This week Nick came home with the film one day because he had found it cheap somewhere. I was actually curious to see it, because I had just watched a documentary on Wallis Simpson. I had also watched Kate and William get married earlier this summer, and just today I fastforwarded (it was so boring) through Prince Albert's and Charlene's wedding in Monaco (she seemed awfully sad)... So I was kind of ripe for another film about the Royal family.

The King's Speech looks very gray and feels slow. At first I was downright bored by the film. The stuttering king-to-be, David (Colin Firth), failed to make me care for his troubles. He was so cold and so privileged. Little by little and with a lot of help from the speech therapist (Geoffrey Rush), the film got more emotionally involving. It turned into a film about empowerment and friendship. It's kind of too bad that the setting had to be the Royal Family, because the stiffness and grayness remained.

The past and present of the English Royal family seems to be an endless source of fascination, and not so only in the UK. Why do we want to see kings and queens as ordinary flawed people, when at the same time, their higher value is stated and restated by our admiration/hatred? David/George VI as played by Firth, asks what's the point of being king when he doesn't even have any real political decision making power. That's a good question. And was it really that important to the English masses during WWII that the king managed to deliver his speeches without stuttering in the end?
Email Post