Everything Is Copy (2015) Directed by Jacob Bernstein & Nick Hooker 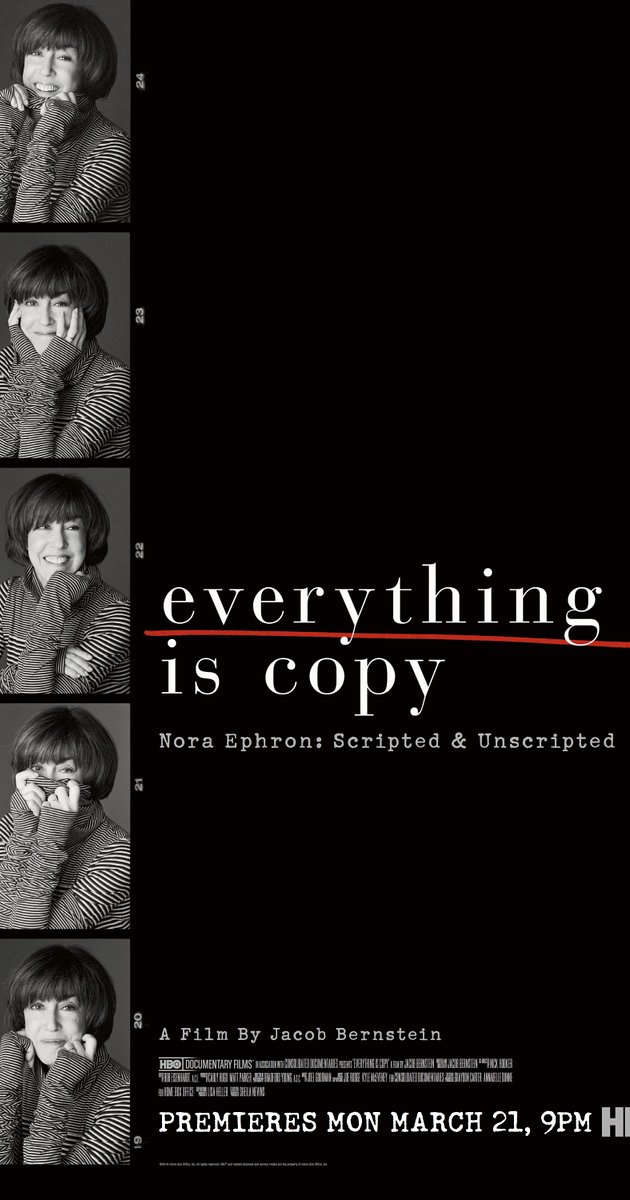 Astrid:
I have become the biggest Lena Dunham fanatic. I love Girls (the HBO TV series). I think it's a feminist masterpiece. I also loved Dunham's memoir Not That Kind of Girl, which I read last week. Then there is Lenny Letter, which is a genius publication in its own right and another kind of feminist move to admire. Lena Dunham manages to discuss womanhood and girlhood in a way that's both unashamed and unafraid of the difficult issues and remains always funny in a kind of Woody Allen way. I was not surprised when I learned that Dunham went looking for women who write about women's lives in 1970s self-help books, in Erica Jong's 'zipless fucks' and in Nora Ephron's writing and films. I feel like my love for Nora Ephron movies has finally been scientifically proven sane. It is surprising though, that I didn't know anything about Nora Ephron, the writer. 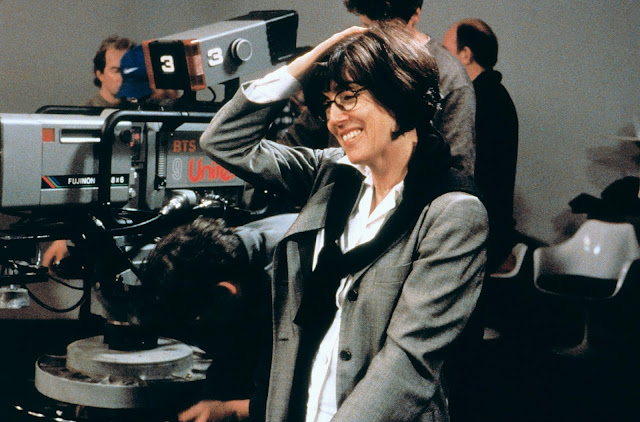 Everything is Copy is a respectable effort to try to understand who was the woman behind so many successful comedies – the most famous being When Harry Met Sally (1989) and You've Got Mail (1998), I guess. She went from being a journalist and a novelist to being the director of her own films. This is why she is an important role model to Lena Dunham still in the 2010s. The documentary is empathic, but shows that Ephron had many personal traits that appeared unconventional, difficult, even unlikeable.
What is central to the documentary is the way in which Nora Ephron seemed to have taken in her mother's phrase 'everything is copy' to justify writing about personal experiences and people close to her. She had the need to open locked closets, so to speak, and to air taboos and secrets. She also had a strong need to succeed as a writer. The documentary shows that her parents had been Hollywood script writers but had turned into abusive alcoholics when Ephron was a teenager – a tradegy for Ephron and her siblings.

Lives are full of contradictions. Demanding openness and the ability to break some glass ceilings, do not mean that there is nothing a person doesn't hold on to in silence. When Nora Ephron got diagnosed with cancer, she chose to tell no one. She hid her illness for years and then when she knew she was terminal, still kept it a secret from everyone apart from her close family. The documentary wants to understand this decision but fails to, in my opinion. Letting go of life, knowing that your own death is happening very soon is a very personal, physical and concrete matter. It is not anyone's copy. Dying is singular. Therefore, I think that the documentary is painting a contradiction that isn't there. Naturally, there is sadness and that shows in people's memories as they recount stories in the doc. But Nora Ephron movies remain. All the bad and the good. The fluff and the tuff. And her books ––I will be reading her memoirs soon.


Nick:
The last few weeks have felt like a strange limbo has gripped my body. The inevitable apocalypse that will inflict pain on all of us is surely round the corner. I thought I'd cheer myself up by going to see the Batman v Superman film. I had been warned it was the worst film ever made not only by the universal critical consensus but by friends on Facebook. In the end it was a pretty OK superhero flick with two or three jaw-dropping scenes (which let's face it – most movies don't even manage one). The media attention/obsession on the films subsequent box-office takings tells you all you need to know about these 'times'. We live in a numbers era. Click bait and so forth, leave your integrity at the door. Fuck it, leave your talent while you're there as well. We don't need it maaan. We only need to know those fucking numbers. It hasn't always been this way. We watched Everything Is Copy, the Nora Ephron documentary made for HBO and I wonder how she would have fared with her subtle, sharp and real talent if she burst onto the scene nowadays. Unfortunately, whilst watching this, I realized I didn't really like Ephron and her world – it's so white, elitist and middle class. A bit like the Finnish hip–hop scene.

I'm not sure what bugged me about Ephron. But really I don't really rate the work of hers that I'm intimate with as much as everyone else does in this doc. That's OK. The bottle says one thing, the taste is something else. And I sure admire Nora and what she achieved. She was an inspiration to many. Everything Is Copy is a very perceptive and well made documentary because her son Jacob Bernstein really gets an essence of who Ephron is on the screen and possibly it's an essence Ephron doesn't want you to know exists. Ephron was so much about being in control. She hid her impending death from everyone (and some friends felt anger). She's interviewed here as well as her nearest friends, family and colleagues. There is genuine love and insight of Nora Ephron in this film. I haven't read any of Ephron's books (and maybe that is where the true genius lies – as Lena Dunham and many others tell us). But what about her movies? For me they're at best whimsical at worst indulgent disasters. But saying all that, at times the writing stands up in those films (and I haven't seen them all).

We did watch the truly abject Heartburn awhile ago. Based on Ephron's bestselling novel the movie stars Meryl Streep and Jack Nicholson. Heartburn is a very biographical look at Ephron's own relationship from the time. It's raw and real in some respects, but the movie just doesn't work on any level. Then there's Silkwood, which is great and When Harry Met Sally has a real sharp Ephron script. I'm a sucker for those sentimental titans Sleepless In Seattle and You've Got Mail. But maybe that's why I dislike what Ephron stands for (at least in a filmic sense)? A cuddly sentimentalist that softened my own edges and my standards (or maybe Ephron just reminds me how old I'm getting). But then the excerpts of her writing in Everything Is Copy narrated by various talking heads still sound so fresh and edgy and attitude filled and exciting you wonder at what moment did Ephron decide to become the Chris Rea of cinema? In the middle of pondering this confusing mess it suddenly dawned on me: Nora's still in control and how things seem are exactly how she want's them to seem.
Email Post
Labels: author cinema director documentary everything is copy feminist film hbo jacob bernstein movies my lawyer will call your lawyer nick hooker nora ephron screenplay