Raiders Of The Lost Ark (1981) Directed by Steven Spielberg 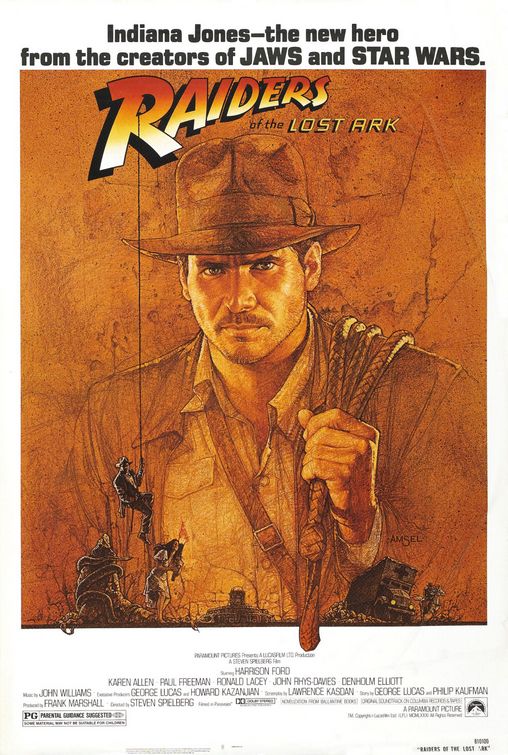 Astrid:
There was only one way to get me to sit through Raiders Of The Lost Ark again, if I could watch it with a child who has never seen it before. Sure enough, the scenario took place this weekend and  she declared it one of her favorite films. Watching movies with a child is very rewarding. They bring me to see things in a new or at least refreshed light. I was quite uncomfortable with the violence the film contains, but the child was very curious to see someone's face 'melting off', and the numerous skeletons and the snakes. She took it all as pure entertainment and went to sleep without nightmares (the only thing that was making her sick was the thought of the chocolate she'd been eating while watching the film).

When I first saw Raiders Of The Lost Ark I was thrilled too. I think I started from the second film and was thus very impressed by the ape brain soup. It's funny how many Spielberg films left an impression on the Young-me. And how many of his movies infuriate me now. Jurassic Park was the one I went to see in a theater in 1993 – and thought it was amazing.
I must have been a less opinionated person then and more able to enjoy what life throws my way. It is an ability I struggle to connect with these days. For example, I hate James Bond. I don't have the sense of humor or the senselessness for it. I think too much, I get offended. The same goes for Indiana Jones. It's best I don't begin my analysis, because somehow I survived through the film without the Adult-me's perspective.

To get back to my safety area, I am about to curl myself on the sofa and watch a Woody Allen classic. It's going to be one that I definitely know all the lines for. Sorry Indy, don't expect to see me in your class with my eye lids batting for your attention.

Nick :
When Ingmar Bergman died a few years ago (2007),  I remember having an argument with a friend about who was more important and who would be remembered longer: Bergman or Steven Spielberg?  I think the right question might have been: should cinema make us dream and create an  escape from our daily existence, or should cinema make us reflect on the harsh realities of the human condition? Of course cinema functions as much more than just these opposites (as does the individual cinema of both Bergman and Spielberg) and ultimately any such arguments are futile. For the record, I was definitely in the Spielberg camp. I think Spielberg will live longer in people's memory (as if that matters). And furthermore, I personally prefer Spielberg's films. This says more about me than either film maker.

I've watched Raiders Of The Lost Ark countless times, it's a flawed movie for sure. But the action (which is of the roller-coaster variety) is exhausting in its excitement. There is a strong sense of humor, a Bacall-Bogart type of chemistry between the principles (Harrison Ford & Karen Allen) and at times, it's extremely violent. It also reveals Spielberg's on-screen loathing of the Nazis, a theme he would come back to in subsequent pictures. George Lucas co-produced the movie and there is always a sense here that this is two movie nerds (albeit rich ones) paying homage to an era they grew up in and the first movies they ever saw. That is key, as Raiders Of The Lost Ark displays an energy from Spielberg that he's shown since but rarely bettered. As Raiders of The Lost Ark celebrates 30 years of existence, much of what we know of as the generic action movie stems from here, but Raiders... offers so much more.

Harrison Ford gives one of his better, less resentful performances, he actually seems quite animated here. Ford's an actor who you feel expects to be in a better caliber of picture, something deeper (Bergman perhaps?) But people love him as Indiana Jones/Han Solo (or that type of wise cracking hero), so he's accepted his lot and slept through many of these type of roles, reluctantly giving the public what they want. In Raiders...he's still enthusiastic. Spielberg meanwhile continues to carve out an unpredictable filmography (with varying results). Raiders Of The Lost Ark still finds Spielberg at a time when he was more in the role of mass entertainer. For me Raiders Of the Lost Ark still shines bright as edgy, knowing entertainment and represents an early marker of greatness from one of cinema's masters.
Email Post