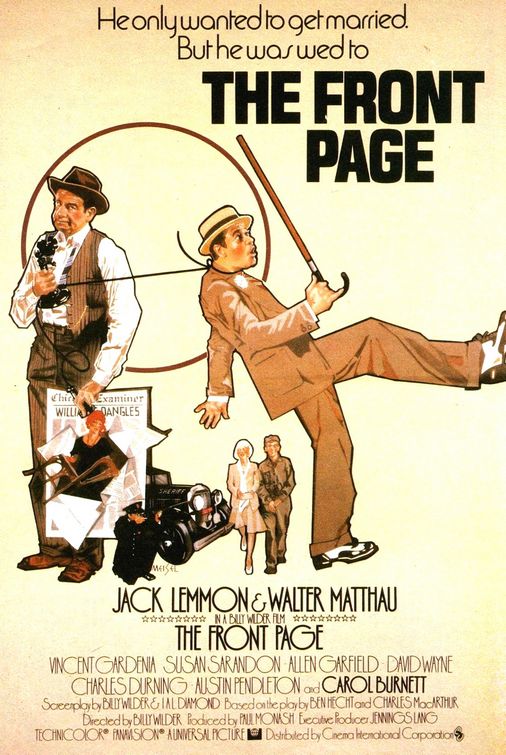 Nick:
Familiarity breeds contempt. This isn't just my view, you could also level that charge at Billy Wilder with his remaking of The Front Page. This is late Wilder, taking his hands off the production mantle and just opting to co-write (with regular writing partner I.A.L Diamond) and to direct. It's a clinical yet still stylish film. You feel Wilder is here because he's got nothing better to do. Wilder and Diamond inject some cynicism, black humor and crudeness into the script, which you expect. What interests me most about The Front Page is the remake angle. This was the third time this story graced the silver screen.

I can't claim to have seen the original film version from 1931 but the not so much later retelling, going under the name His Girl Friday from 1941, is cinema gold. Howard Hawkes' 1940s remake with Cary Grant and Rosalind Russell has all the smarts and swing that Wilder's remake is lacking. Worse for me (and Astrid I feel) is that we actually watched His Girl Friday quite recently. The Front Page is an almost scene for scene remake, with some characters changing gender being the only real difference. Few films would compare favorably with His Girl Friday, so a flat, going through the motions version didn't really stand a chance.

Walter Matthau and Jack Lemon offer quality to Wilder's picture (when do they ever let you down?) as the wise and cynical newspaper men who know how to squeeze a story. Sad to say the casting of Susan Sarandon, in an early role, only highlights one of the films shortcomings. So much script time is handed over to periphery characters, which eats into the screen time and the acidic chemistry Matthau and Lemon bring to the picture. Wilder ultimately makes an OK picture. With a little more focus on the central duo, and a more elegiacal touch, Wilder could have bought in a picture with the emotional pull of his late masterpiece The Private Life Of Sherlock Holmes. Instead, The Front Page feels like it was just a job for Wilder.

Astrid:
The Front Page marks a change in the way I watch a movie: I sat knitting through the whole thing and thought to myself 'this way I can last through any boring film'. That was the point. The Front Page was a bore – especially if you had seen the previous version not so long ago and this one appeared to be an overly-faithful remake with way too little Susan Sarandon in it. Yet, through the new-found knitting, I was able to emphasize in my mind the act of sitting in a chair and really concentrating on being this woman who knits while enjoying the evening's entertainment. I could feel the calming effects of doing something repetitive with my hands and I enjoyed the sense that women have sat in comfy chairs in dimly lit rooms knitting for centuries.

From another perspective it could be asked, why is it that women who are sitting down taking a break, often have to appear to be doing something even still? Is the knitting a sign of being a dutiful wife, not wasting any precious moments? It seems like I am talking about an image from a couple centuries back... But in my case in 2011, is knitting a sign of restlessness and inability to concentrate when I used to be just fine watching a film from beginning to end with my hands in my lap? Maybe.

One solution to my frustration and lack of concentration would be to watch better movies. Recently our choices have been unlucky. The Front Page in itself is not a bad film, although I have no idea why it needed to be remade in 1974 (for the third time), still not that many decades after the original came out.
Right now I dream of going to see a film in the theater for a change. It would be luxurious. And if my hands would be occupied with anything they would be diving into a bag of candy.
Email Post