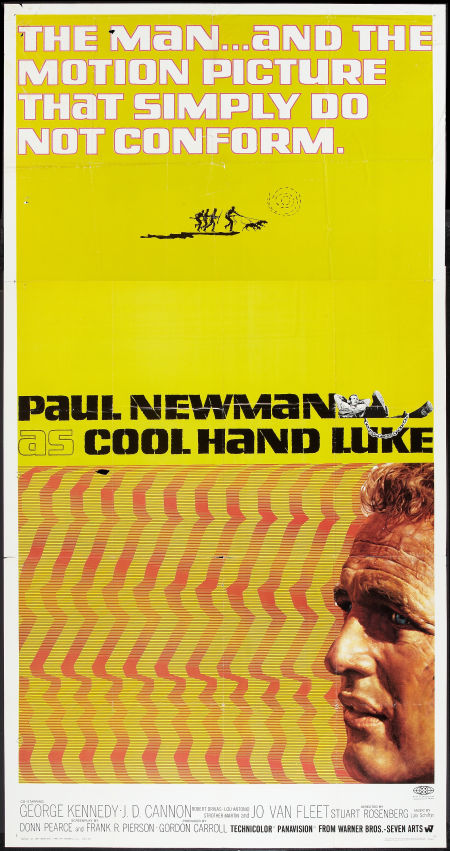 Astrid:
As the poster announces, this film is essentially a vehicle for Paul Newman. Whatever else he represents in the story of Cool Hand Luke, he is always recognizable as The Film Star, as a very beautiful and calm presence always there for our feasting. I thought I could sum up my review in a melodious sing-along one-liner: Paul Newman without his shirt/ Paul Newman without his shirt (then some nice whistling). But maybe I could sort of scratch my brain for something more on the subject of his divinity.

Like that I bought Paul Newman Salsa for New Year's Eve 2010, mainly because the jar had a funny drawing of him on it. The salsa was bland and remained pretty much untouched until it molded in the fridge. I kept the jar. Then a bass player who used to live up north with a basement filled with copies of one particular Paul Newman poster, decided to give me one of those precious pictures. Paul Newman is now in our hallway (a little too large not to feel intimidated by him every time I walk by).

Cool Hand Luke is a pretty serious and painful film at times. It's more than a vehicle for one actor really. I have to take back what the poster prompted me to say. I feel claustrophobic when I watch films about prison life. Especially ones with escape scenes. Add to the discomfort a scene where Paul Newman eats 50 eggs in an hour and you can be certain that I could not sit through it whistling to my new tune about Paul Newman without his shirt on.

Nick:
We all have our favorites. I'm a serious fan of various musicians and authors and actors – well mainly creative types. Paul Newman is definitely a favorite for me. Yes, he came out of the Actors Studio, enthralled by Brando & Clift. But throughout his career he had a certain dignity, even though he was massively popular. He's always watchable in whatever movies he's in, but in a handful of films Newman is exceptional, the brooding outsider. Cool Hand Luke is one of those pictures and one of his most iconic roles.

It's been a few years since I've seen this. I picked up the movie the other day cheap, seemingly remembering the film as light-hearted social comment. Actually, most of Cool Hand Luke is grim viewing. The comment the film makes concerns the crushing of the individual spirit by the State. The  non-conforming behavior of Newman's Luke Jackson is initially celebrated by his fellow prisoners from the Southern State prison they inhabit. But as the prison authorities attempt to crush Luke's rebellious actions towards his own life's futility, his situation descends into that of the eternal loner.

The famous egg consuming scene offers light respite from the prison guards' brutality, with Cool Hand Luke still packing today a weighty social punch. Joining Newman is an excellent, then mostly unknown supporting cast, including George Kennedy, Dennis Hopper, Harry Dean Stanton, Ralph Waite and Strother Martin. Lalo Schifrin supplies a great score (Flaming Lips later covering Plastic Jesus). Cinematography is excellent and Rosenberg keeps sentimentality at bay. We've later seen similar scenarios played out on film, most notably with One Flew Over The Cuckoo's Nest. But Cool Hand Luke is all about Newman. His Luke is as great a rebel sticking it to the man as I've seen on screen. To quote the picture, "Oh Luke, you wild, beautiful thing. You crazy handful of nothin''" If you're a fan of Newman, this is essential.
Email Post