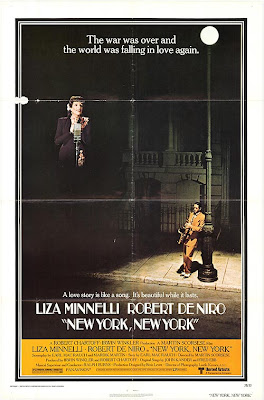 New York, New York has become one of my favorite movies. I can watch it at least once a year for its cinematic qualities, but also for the story itself. I think it is important that the film was made in the 1970s but it depicts the 1940s. The historic setting of the plot is in the 1940s, but Scorsese also refers and borrows from the 1940s Hollywood and their way of making musicals. "Artifice and truth" is what the director is trying to combine (as he says in his intro to the movie). In the film Scorsese combines the magical and unreal (present in movies from the 1940s when they were still a very new art form), with a reality in the characters and their story in a manner that became popular in the 1970s. This combination must be what makes the film so thrilling to watch still in 2010.

From my personal perspective: the exploration of a relationship between two creative people is very fascinating to me. Robert De Niro's Jimmy and Liza Minnelli's Francine fall in love and work together in a band, but for many reasons they cannot live together for very long. They fall apart and become successful on their own. I have to add that even though the director talks of this conflict as a result of their ambition and creativity, it appears from my perspective that the male character, Jimmy, is mad and unstable. He is overly possessive and competitive. His whole manner towards Francine is an attack straight from the beginning. I could claim that Scorsese is depicting a kind of masculinity in this movie that doesn't allow for women to be creative. The old-fashioned male who from the mid-20th century onwards has been struggling for air.
Or at least it seems that Francine's talent and finally amazing success makes it impossible for Jimmy to be coupled with her. The movie does not judge its characters and there is no happy or very sad ending to it, so it is almost impossible for me to decide where the line between creativity and madness is here.