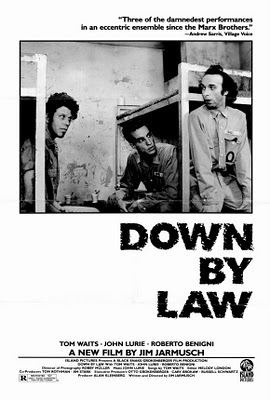 Nick
Jarmusch's third Film is a wonderfully shot, dry, moody three part story arc that deals with the arrival of the other. Zack and Jack (Tom Waits and John Lurie) are both the victims of police set ups that lead them to the same New Orleans prison cell. Never quite feeling comfortable in the small cell, there only bond is the fact that they are both innocent tough guys. Roberto, an Italian immigrant with poor English skills, is put in the same cell as Zack & Jack. Roberto (played by Roberto Benigni) , loves Walt Whitman and quotes Robert Frost. He's funny and annoying at the same time, he reveals he killed a man with an 8 ball between the eyes. Roberto fashions an escape and the three cell mates go on the run. This film plays like a Tom Waits song set to celluloid, mean , moody and funny. Benigni is hilarious, Waits and Lurie are cool. Jarmusch shows his love for casting musicians (something he does in all his subsequent movies) and Benigni saves his best work for Jarmusch. The sharp Black and White photography and score from Lurie (interspersed with Waits songs) just heighten the atmosphere. Although I've watched this film many times, I never tire of it, it's deadpan wonder works every time.
Email Post