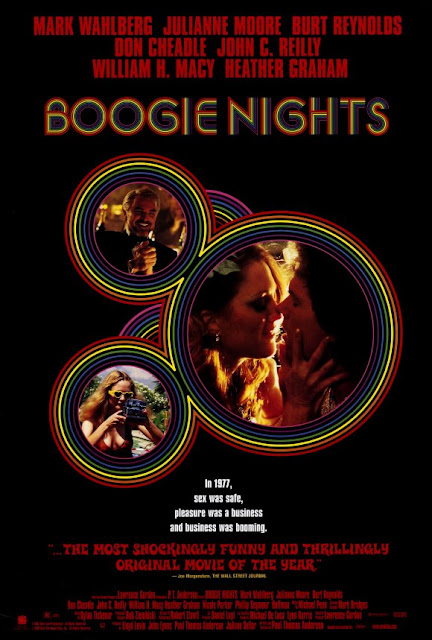 The way I remember the film and the way I experienced it now are two very separate perspectives: The porn film making content, the always naked women, the drugs and the eventual judgment the film appears to pass were all one big teaching video for the teenage-me. Instead of feeling uncomfortable and critical towards the way women were in Boogie Nights, I felt uncomfortable and as if this was a here's-how-to guide. It is baffling to realize how much a teenager watches a fictional piece of art and reads it as a lesson on Real Life, Real Sex and Real Relationships. I think I came out of seeing this one for the first time thinking something like: 'ok, cool women are available and enjoy sex with anyone at any time, they drown their sorrow into silence and always look good no matter what.'

Nick:
Do you remember a time when people thought Fionna Apple was somehow the musical zeitgeist? It correlates with a time when P.T.Anderson was regarded as the savior of modern cinema. This feels oddly conservative to me. But I think it's true to say of most things that seem cutting edge at the time, when we look back, we realize it was just more of the same. Apple seems to have disappeared into some vacuum. With Punch Drunk Love and There Will Be Blood Anderson seems to have passed his fan-boy period and shows signs of becoming that predicted savior. Bloody hell, the then approaching pre-Millenium 1990's, remember that time? One could be mistaken for thinking that Anderson as well as savior, perfectionist and friend of Aimee Mann was also the oracle, as demonstrated by the consciously "intelligent" Magnolia of 1999. Boogie Nights placed Anderson on the map and made him hot hot hot.

There is no way round this, but to not note the specific influence of Scorsese on Boogie Nights is to miss something crucial with the picture. From the use of long camera shots and fast editing to the constant 1970's soundtrack, Boogie Nights stylistically is the work of another director. It's second hand goods watching Boogie Nights (primarily Goodfellas, Raging Bull, Casino). Rather like the debt to Altman on display in Magnolia. It doesn't stop Boogie Nights being a blast at times. The first hour is a non stop disco ride of good looking men and women "getting it on" on the dance floor or in front of camera. The picture has energy. Excellent scene after scene is readily crafted here (especially the 1970's period), every detail shot to perfection. The ensemble cast (many would re-appear in Magnolia) is universally excellent. Burt Reynolds surprises with his smoothness and sometimes sensitivity. Still, you do have to wonder what Julian Moore has done to Anderson for him to always have her play such desperate characters in his pictures. But this brings us to another element which constantly raises it's head in Anderson's early films : depression.