The Doors (1991) Directed by Oliver Stone 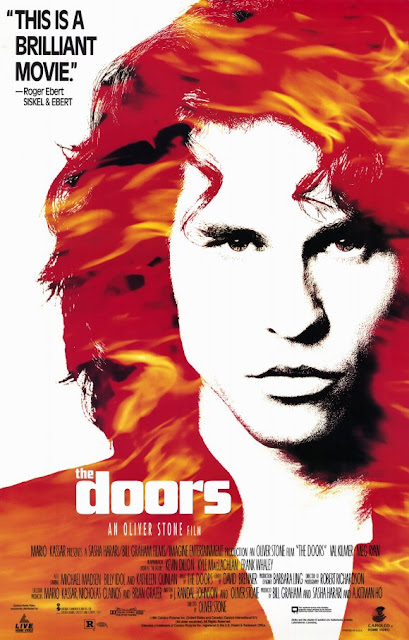 Astrid:
The Doors is one of those films I watched as a preteen with my very good girlfriend on one of the many over-night-stays at her house. She always knew the best movies with sex, drugs and rock'n'roll...Back then we loved Meg Ryan and we learned to love Val Kilmer as Jim Morrison. Later we actually loved Jim Morrison, or at least she did for a while. I was always a little uncomfortable with Jim's imbalanced ways.

This is my second time watching The Doors as an adult. It has lost all its allure, if the confusion I experienced as a kid can be interpreted as infatuation and enjoyment. This film makes me physically sick and mentally frustrated. I'm not an Oliver Stone fan in general, but I must say this movie is a low point even for him. It would be insulting to young people to claim that this film is juvenile in the most predictable and uncool manner. But it is. It looks down on young people, it simplifies everything from the 1960s counter culture to The Doors as a band. I know some people highly rate over-simplification, but I have to remind you Oliver Stone, usually it's just a result of being lazy and unwilling to see more than one side to a narrative (or to life). Simplifying narrative or a perspective is not the same as paraphrasing. I want to stress that point.

Sometimes it happens that time makes something kind of rubbish turn into a decent depiction of at least the time it was made in. It's not going to happen with The Doors. The film is now 20 years old and the wig-like hair on everyone still looks ridiculously 90s. Meg Ryan looks like Stevie Nicks in the early 1980s, and Nico from the Velvet Underground looks like a hooker from 1991. And for a so-called biopic I learn very little about the story of The Doors or about Jim Morrison. What's the point?
This is not a brilliant movie, don't believe the poster.

Nick :
Confession time: I went through a period in the late 1980's early 1990's where I wore black leather pants. Cowboy boots too, flowery shirts and I grew my hair pretty long. I could easily have been a roadie for early Primal Scream. Around this time I really got into The Doors. Jim Morrison and his cohorts received a serious re-appraisal in the music press. A reprint of  Hopkins' and Sugarman's insightful Morrison biography No One Here Gets Out Alive (The Doors is based on this) reignited the mythology. I bought into it, it lasted a couple of years then my punk/indie roots resurfaced. I still like most of The Doors music, but the idea of Morrison as some shamanistic, Dionysian God is something that Oliver Stone really buys into with The Doors.

It's hard to know where to start with this mess of a movie. I could mention Stone's terrible sequence of acid trip scenes that seem to dominate the film. His cliched look at the 1960's counter culture.  His determination to show women as creatures who are here on Earth expressly to lose their clothes. Val Kilmer as Morrison smugly believes he's God's gift. Even more baffling is the casting of Meg Ryan as Morrison's beleaguered girlfriend Pam, it's like watching Martha Stewart on drugs. The costume/set departments give everything in The Doors a 1990's take on the 1960's. I've never seen a film with so many bad looking fake beards or wigs. Let's not even touch on the subject of Nico's portrayal here as some cheap looking porn model.

More importantly, being in the band The Doors is portrayed as being no fun whatsoever. This is a movie where Kilmer utters the line, "I'm the poet and you're my muse" whilst keeping a straight face.You know you're in trouble when Billy Idol shines in a cameo! The Doors reaches a nonsensical nadir when Stone, already killing us with his attempts at aligning Morrison with Shaman and Red Indian chiefs only Morrison can see, mixes his own version of the 1960's key events during a scene where Morrison faces meltdown. It has no relevance and is so laughable. When you consider the source material, Stone really lost the plot here. The Doors fails because it doesn't make you want to go back to the music. At the height of my The Doors fandom, I enjoyed this in 1991. In the cold light of 2011, The Doors is no fun and just plain embarrassing.
Email Post