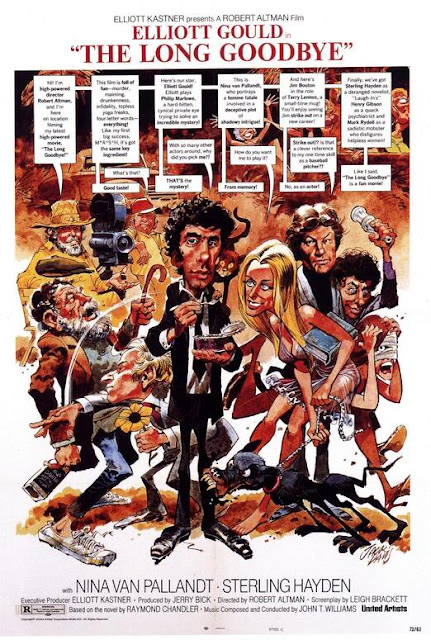 Astrid:
I don't really like the poster for this movie. It doesn't advertise the snotty grimy sophistication of 1970s LA. It cheapens the lush contradictions.

We were only as far in as the titles of The Long Goodbye when I needed to ask Nick:
–Is this the kind of man that you somewhat relate to? Elliott Gould, (or Jean-Paul Belmondo); the suspicious detective or an incompetent petty criminal always in a suit. Always in the same suit.
I think the answer was a Yes. Obviously, that is why we have spent the last couple of years getting more and more obsessive about  the 1970s Hollywood. Together, I must admit.

Watching The Long Goodbye for the second time (the first time I did not make much of it) I focused on the portrayal of Philip Marlowe. I attempted to see him through the eyes of my boyfriend. 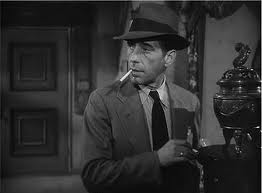 First of all, this is a legendary private eye known in literature and cinema and epitomized by Humphrey Bogart in The Big Sleep (see also the main picture in this blog). I say this, because I claim him to be a silent constructing vision in my boyfriend's imagery of the ideal male. (only speculation of course)

In The Long Goodbye, Marlowe has updated himself for the decade. He is still chain-smoking, drinking, driving and mumbling and wearing his suit, but he carries himself with a certain hipness. He has a rock'n'roll edge. Yet, Gould's Marlowe is not overtly sexual, passionate or crazy. He is slow, endlessly sarcastic, superficial and right-on (permanently stoned?).

I'm not sure I cracked the code of my boyfriend's masculine identity right here, but I sure prefer these guys to Lemmy.

Nick:
Philip Marlowe: "It's okay with me".
Cats, of the furry kind or cool cats, Elliot Gould's chain-smoking take on Raymond Chandler's  Philip Marlowe is one of cinema's wisecracking top draws. As I watch this film for the umpteenth time, Astrid asks me if I relate to Gould's Marlowe. I'd like to say now: I wish I was as rubber-faced, as able to let the cigarette dangle so tantalizingly from my lips, so smart at solving cases and could drive as cool a car.

As an ideal, we may dream of being a Marlowe, or a Gould. The reality is far more mundane. That's why even this kind of dry cinema thrills. It's an escape. But before drugs and booze took their toll, there was never anyone as droll or cool as Gould in American cinema. He could have been the US version of J-P Belmondo, or maybe he was.

So, let's clear this up. The Long Goodbye is one of my favorite films ever. I also love Raymond Chandler's source novels. Of course, Altman's take on Marlowe is infused with his usual dry take on LA laziness, everyone conceivably in this picture is stoned or drunk. But it's also a different kind of Altman picture, not so focused on the group, this is more individualistic fare. Vilmos Zsigmond's photography is stand out and enough reason to fall in love.

As ever with Chandler and Marlowe, it's not so much about the case he's trying to solve but about Marlowe himself, the character and what we learn from him. This Marlowe has the same principles as say a Humphrey Bogart variety, but the world he inhabits is the 70's and not the 40's, so attitudes have changed. It's all roundabout routes, taking the long road round to solving, rarely being direct, observations are essential. So yes, The Long Goodbye, It's OK with me. This film represents a certain aesthetic that in my mind is key.
Email Post