Nick:
It's sometimes very hard being a Clint Eastwood apologist. There's the blatant republican supporter. The empty chair episode. The accusations of just making right wing cinema. The stories of  harsh treatment of some of the ex-women in his life. But of course there seems to be one place where Eastwood seems to tone-down his right-leaning politics and if anything displays a liberal world view – yes, his movies. The much maligned American Sniper is obviously a critique of the main protagonist and can surely be viewed as an anti-war movie. Yes, the film can seem non-committal and neutral in tone, but Eastwood's ambiguity only heightens the ridiculousness of the situation and the movie's finale expels any doubts of flag waving. A leftist media used the film to attack Eastwood but it really felt like this was unnecessary. Eastwood's cinema has often flown the flag for many a leftist cause: The Outlaw Josey Wales features possibly the first humane depiction of the Native Americans in film. Bird brought jazz into the cinema mainstream for the first time ever. Unforgiven goes deep into the fabric of screen violence. Million Dollar Baby meets euthanasia on its own terms. High Planes Drifter, Tightrope Bronco Billy, Honky Tonk Man, White Hunter Black Heart, Letters From Iwo Jima, Mystic River and the devastated Detroit of Gran Torino contribute to one of the most eccentric screen filmographies ever. There's also enough there to suggest Eastwood is one of the great directors of the modern era and fiercely political too. Even Dirty Harry seems hippy righteous in these conservative times. Eastwood has subverted from the start, the Dollars trilogy creating a new view of the West. Play Misty For Me is where Eastwood the director started.

Again, the liberal Clint is on view in Play Misty For Me. He plays a funky, jazzy DJ, Dave Garver, who spins discs on a cool radio station in Carmel, California. Hippy is the word, because Play Misty For Me is very much a product of its time. Eastwood's direction veers from efficiently tense building to weirdly distant and out of focus. Saying all that, Play Misty For Me works because it never forgets how to scare its audience and yes it features dull moments, but Eastwood has taken a note from Hitchcock's Psycho and remembered the shock value of a sharp blade. DJ Garver obviously believes in free love and Play Misty For Me plays on the notion that if you play around too much you might just deserve what's coming your way. What Garver gets is whacko obsessive Evelyn who is not only seriously disturbed but likes to have fun with huge carving knives.

Play Misty For Me really works in any of the scenes featuring Jessica Walters as the demented Evelyn. Her scenes opposite Eastwood bristle with creepiness and tension. Play Misty For Me is of course the precursor to all those jilted lover/stalker movies such as Fatal Attraction and full horror/slashers such as Friday the 13th. The horror still works here. Nods to Eastwood peers such as Dirty Harry director Don Siegel (who appears in a cameo) just adds to some of the strangeness Play Misty For Me now possesses. It's hard to call this movie a success, but it still takes hold in its own lumbering way. Enough themes for future Eastwood movies are touched on (a jazz festival shot in a documentary style sticks in the mind), and Play Misty For Me has indeed been influential. But its real purpose and curiosity remains its year zero profile for one of the most important directorial careers of modern times.

Astrid:
There is no way that I can write this review without talking about my new guitar. So I might as well just tell you right off that I HAVE A NEW GUITAR. Yeah! My fingers hurt from the little strumming I managed this evening  – I did play a song of mine where I sing 'Clint Eastwood is 79 and he's holding that gun again'. So there we have a connection to Play Misty For Me. When I first saw this movie some years back I was genuinely scared and thrilled. Now I was laughing, entertained but never scared. The movie seemed cool, if not a little too predictable. The 1970s aesthetic was fun to watch as was the main actors themselves. I could not help watching the movie from the perspective of Clint's body of work. This was his directorial debut. I could see where he chose to do things differently the next times and which things became stable in his movies (Carmel for example). 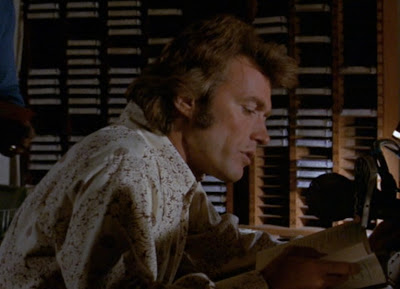 Movies about radio stations or program making or even about radio DJ's are not that common. I can think of just one other film related to radio and that's Robert Altman's final movie A Prairie Home Companion. As a radio DJ myself, I find this aspect of Play Misty For Me fascinating, even though it is really not a film about making radio programs. I love the detail of Clint putting on an emergency reel-to-reel before dashing out to save his girlfriend from the hands of the crazy stalker woman. I also like that his shows take place at night and he takes phone calls to the studio – that's how he first 'meets' the woman who ends up stalking him. She calls in every night and asks for Misty.

Play Misty For Me is really a movie about celebrity and stalking. It is probably a script that Clint could rather easily relate to after making all those Spaghetti Westerns. I'm sure he could at least imagine himself in a similar situation, even if he didn't ever have to push an overly-eager admirer into the river. I salute the un-flashiness of the radio medium in this context. And I have to mention, in my opinion Clint Eastwood is a trademark un-performer. He holds back, he gives very little, so that the little he gives means a lot. That's his acting trick as far as I can dissect his screen persona. When I mentioned this to Nick, he didn't agree. But for me those are the entertaining qualities in this movie. We have been awfully silent here about Clint for a while, so there – that's fixed now. 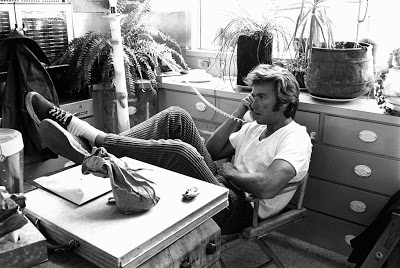