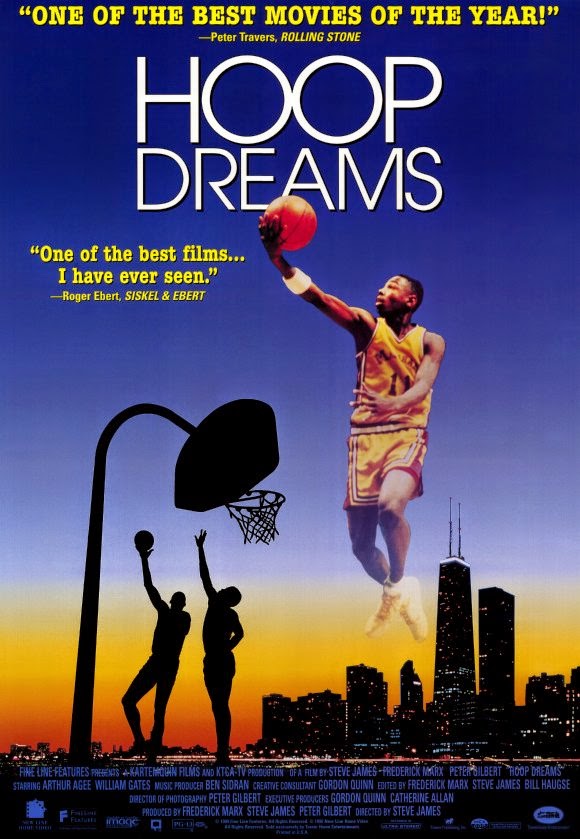 Nick:
We're here in the individualist state. Fuck all others brothers. I want everything for free and who gives a shit if anyone gets paid for it. It's 2014 I'm told, are you a dinosaur? Stop standing in the way of progress Grandpa Indie. Creativity costs but nobody wants to pay. Etcetera, etcetera, etcetera. The last few years has seen a new kind of ghetto grow, the virtual one. A generational squeeze of poverty handed down to your children. We don't try to solve poverty and hardship, we just exploit poverty for our own selfish benefit. I'm as bad as the next consumerist. UKIP on the rise. The right gets bigger, what you gonna do? What do you stand for? Isn't it time to take a stand on something? For some people the stand you take is the striving for survival.


It's been a long time since I watched Hoop Dreams (20 years), but nothing's really changed. Inner city street lives are still determined by race, people still live in poverty. After all these years Hoop Dreams retains its relevance. Hoop Dreams shows you the level of exploitation that goes on from a different view: the world of college basketball, with a dream to one day become professional. It doesn't get better than this. Hoop Dreams should be compulsory viewing. For those in love with the Hollywood endorsed White Men Can't Jump here's the real ghetto perspective. Hoop Dreams retains its potency and its urgent view of lives idealised because this shit is still real, still ill. Hoop Dreams should be viewed so you realise the injustice in race relations, or just the plane hatred involved. We're talking the land of the free where everyone gets the democratic right to...not qualify for THAT education. Money talks (as ever) but different challenges and obstacles are constantly put in the way of our heroes William Gates and Arthur Agee.

It's a saga, and if you felt that most cop drama ever stereotyped against black people – then watch this. Your choice in the morning is probably about which expensive hair products you're going to use...facial scrub, nail varnish, eyeliner, after-shave and so on. You'll read this on your latest Macbook Pro, drive your expensive car to work and buy your latte from that organic hipster coffee place. Hoop Dreams reminds you that a lot of people (the majority) just don't have or ever will have those menial choices you take for granted every day. I'm still angry after watching this again that nothing has moved on after so many years. Hoop Dreams shows a capacity for dignity and ambition against all the odds. Inspirational for many reasons and then some.

Astrid:
Before I get into why I enjoyed Hoop Dreams a lot, let me tell you that I don't understand basketball at all. I used to run away from the ball so it would not hurt my hands while trying to catch it. I don't know the rules of the game either. I also have a strong dislike for professional sports in general – it's because of a lack of understanding and experience. The thought of running after a ball tirelessly for days and years or skiing in circles in very cold conditions just to be really fast makes me anxious. I always worry about people getting bored while playing their sport. Then there is the big money. How confusing. Insert Hoop Dreams.

This documentary is still as valid as it was in the 1990s. Hoop Dreams shows through two children's life experience how there is a system in place, where a very poor person with special skills in a specific sport can be taken into a 'better' school to be trained in his sport and to play for the school's team. The aim is to pay the child's education while benefitting from his skills in the games – then the teenager can continue into the best high school level teams and onwards to college basketball and maybe even become a professional. Hoop Dreams shows that while the good players and scouts are black, the guys with the money are white middle aged men. Charity or genuine concern for these individual children hardly figures here – what matters is that the white guy has the winning team. If the players stop being amazingly good in their field, they are worth nothing to the school.

Even to a sport idiot like myself Hoop Dreams shows how beautiful basketball can be. I can see the skills of Arthur Agee and William Gates. Still, it becomes clear that for these young men and their families, being excellent at basketball is the only possible way out of their poverty. The society does not care for their plight, so therefore an individual, a child, has to attempt the impossible and change a whole family's prospect for a future. By playing ball. It's an unbelievable injustice highlighted – mixing sports and money. Think of the 2014 football world cup about to begin in Brazil. But this documentary is elevating, because Agee and Gates have grace.
Email Post