The Trip (2010) Directed by Michael Winterbottom 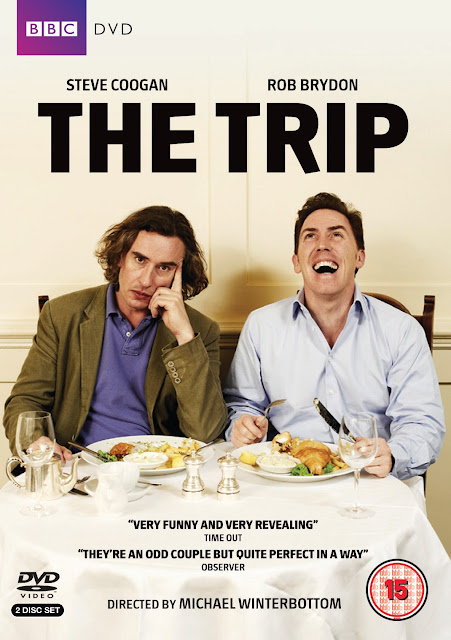 Nick:
August has been a time of extreme fatigue. It's also been non-stop action. I've mixed one album, recorded another, hosted a stage at a festival and moderated a panel. I've also interviewed the record producer of the day, watched some shows and moved office. The day to day has been ongoing too in this time, and it's enough, really. Oh yeah, forgot. I've watched some movies. The Rock wasn't quite as slick as I'd fondly remembered it. Robocop was strangely subdued, though pretty decent (it's been a long time since I saw that one). I did start Tim Burton's Planet Of The Apes remake, but that was soooo poor. We've sneaked in the odd episode of the The Wire (season 4). But The Trip was probably the highlight.

The comedic line between uncomfortable and mockumentary probably goes back as far as Gary Shandling's much neglected genius TV series, The Larry Sanders Show. The Office had certainly been aware of Sandling's penchant for cringe worthy excesses. All the while, Steve Coogan has unfurled a series of characters that occupy that similar area of self-deprecating autobiography. Even if Coogan often hides behind his other personas, he has occasionally played himself on screen (Jim Jarmusch's episodic Coffee & Cigarettes (2003)  has Coogan in this role). In essence, The Trip finds Coogan playing the same character 10 years later, still vying for that big Hollywood role. Having relationship problems, as a last minute replacement Coogan asks friend Rob Bryden along for a tour of the finest English restaurants, the trip commissioned by The Observer.

The six episodes that make up The Trip was brilliantly funny. Coogan and Bryden trying to outdo each with various impersonations (notably Michael Caine, Arnie, Connery, Pacino etc.) whilst feasting on some gourmet food was hilarious at times. These are The Trip's best moments. Winterbottom manages to remind me how pretty England can be. Coogan toys with his tabloid image and maybe even offers us something real, but we'll never know. The ego? Bryden steals the series as the annoying sidekick who's at least grounded, if a little insane. The Trip is a joy.

Astrid:
So it's been awfully silent here but it doesn't mean we haven't been watching anything. We just don't seem to find time to write about what we see. Or we don't watch things together as much. Yesterday I went to see Before Midnight in the theater and a few weeks previously I saw What Maisie Knew. Going to the movies has become a solo event due to childcare juggling issues. Also, at home we've been enjoying the odd not so high quality films together, and began a couple of classics, which we'll hopefully end up reviewing. Wire Season 4 is on the go too. But a while back we devoured the first season of The Trip and it has been on my mind ever since.

First off, some of the humor was so English (I think/hope) that I didn't get all the gags and imitated voices. Nevertheless, I giggled and giggled. Steve Coogan and Rob Brydon make an uncomfortable couple. Brydon is so genuinely kind and generously funny. Coogan is openly mean, jealous and vulnerable too. I guess this was one of those fashionable 'mocumentaries', where it's totally scripted and characterized but the aim is to make it seem real and unscripted. Because reality TV happened.  I don't care to dwell on where the line between the real Coogan and the character was drawn. Separating fiction and fact is a fictitious effort I believe. So I just go with what I saw.

The English countryside up north is stunning. The gourmet restaurants seemed often comical, especially when the two (usually argumentative) characters were plopped in to have a taste and to evaluate everything for The Observer. Steve Coogan managed to make me angry and annoyed in every episode. I guess that was his aim. He behaved consistently like a 10-year-old might with his best friend. He was so jealous of his companion, so competitive, petty and homophobic that it was sometimes hard to take. The interesting thing was that he was mining his own path and expressing the frustration of an artist who hasn't quite reached the bar he set himself. Hollywood and big leading roles. I don't even know who Brydon is, but he seemed completely content as a character actor and an inventor of the 'man in a box' application. This brings me back to What Masie Knew. Coogan plays the soon to be ex-husband of a rockstar (Julianne Moore channelling Allison Mosshart) in the middle of their divorce. It's one of those big Hollywood roles that he was after in The Trip, although he seems to be playing himself again if you ask me. And he doesn't get that much screen time. Poor guy, I guess. His parents seemed really nice.