The Candidate (1972) Directed by Michael Ritchie 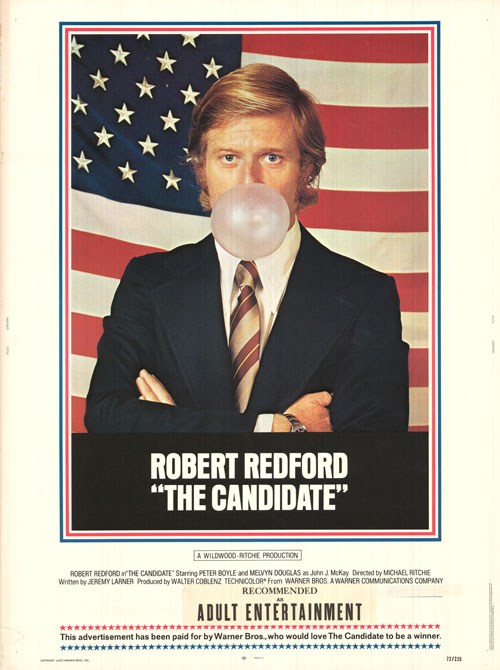 Astrid:
As I am writing this, Nick is whispering on the sofa about his fear that Romney might actually win in the approaching election in the USA. How timely of us to suddenly feel like watching The Candidate.
Although it's a 1970s film, The Candidate is very much like the 2008 Obama victory march. It' a story about something deemed impossible becoming true in the world of politics. And in the world; the Actual Place we inhabit. BTW: Nick is whispering because that's what we do in this house after 8 o'clock every evening for fear of waking up the baby...[try arguing in whispers sometime, it's kind of fun]

Yes, there was a moment when Obama and his presidency represented so much goodness and positivity – it was a proud moment for an idealist and even the non-idealists were oddly chipper for a few months. Later we realized that presidents don't really have that much power in this system of the Western monetary governing. And now the people of US have to make their choice again in an atmosphere that's cynical and hardly very hopeful (Why don't they ever have a communist for a candidate for G's sake – the times are ripe).

Why am I still going on about politics and not Robert Redford? Yes, he plays a really cool democratic lawyer running for senatorship in California. As the campaign goes from a definite loss to actually challenging the current Republican senator, we see the campaign people begin their molding of the candidate's image. At first he can say anything he likes, in the end he has five people writing his opinions on abortion (and his line is: I'll have to look into it more) and everything else. Our world has changed very little since the 70s – now we just have more apps and comps and cyber spaces that have to be filled with adds for the candidates too – but the core is the same: political campaigns are performances built like the best Broadway shows. If I was you my dear American friend, I'd register to vote now and I would give another chance to Obama. We have all seen way too many grumpy old white men at the helm of power.

Nick :
It seems an opportune time to revisit The Candidate: the US presidential election race hots up (tired presidents and Big Bird), the party conferences are taking place in England, local elections are due in Finland, whilst even Venezuala descends into election fever. Realistically it should be apathy. I've given up feeling guilty at the thought of not voting. Of the most electable candidates in most countries the options are virtually non-existant when one discusses policies and for that matter politics. It's the left/right of centre and at all costs make yourself electable. But looking back, it's always been like this. It just feels now a politician's public image is heightened and forever scrutinized with the hope that any blemish may be seized upon. Whatever you do, try and please a little bit of everyone with a little bit of everything. Meanwhile the public yawns. It's not voters that are apathetic, it's politics. The Candidate really does remind us it's been like this for quite some time.

Ritchie's film is gentle in many ways yet manages to make its points in subtle (though not so original ways). I'm sure The Candidate was quite a revelation when it first appeared. It's a smart, witty and slightly cynical look at US politics. It is also so pre-West Wing that it feels prehistoric yet somehow prescient at the same time. But this film is very light. Robert Redford in reality would have walked this election for California senator. His freewheeling down-with-the- kids leftish candidate is too good to be true. He'd win just for his smart suits, his sexy charm and his perfect hair. And much of The Candidate's watchability is just about how damn fine Redford looks here. It's that time when he looked good in anything he appeared in. But this is Redford's curse – he lacks substance because he looks so perfect. Give me a brooding/bored Brando, an insecure Beatty, the winning smile of Newman or the off the wall Nicholson to give The Candidate some edge. Redford has the best hair of the lot, but that's all. Maybe they needed an actor that the audience would think was electable?

I'm being harsh as Redford is really good here – especially his tired of talking gibberish stint in the back of the limo – it's maybe the best of him on film. New Hollywood's most underrated actor Peter Boyle effortlessly steals the picture as Redford's campaign manager. The politics seem really naive now, though it has to be said we're still discussing the same issues in 2012. Ritchie combines cute political satire with a good feeling smarminess which does little to help The Candidate. But it's still a good entertaining movie, if a little flippant. And like most films of the period it looks great. Recently I'm sure Barak Obama mentioned The Candidate as a favorite film. I can see why. Like the US president, The Candidate struggles to balance seriousness with a light touch, and crucially suffers from being caught between two stools.